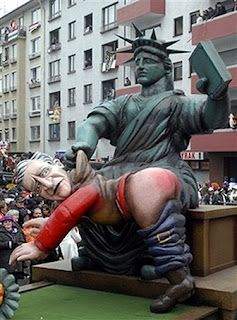 Harper's Weekly News Round-Up
I get this e-mailed to me every Tuesday, and it can be pretty good, depending on last week's news and the writer assigned to distill the witch's brew:

An appeals court in Washington, D.C., ruled that the writ
of habeas corpus does not apply to prisoners in the
American concentration camp at Guantanamo Bay,
Cuba. Americans celebrated the 275th birthday of George
Washington, and President George W. Bush compared the War
on Terror to the American Revolution: "General Washington
understood that the Revolutionary War was a test of wills,
and his will was unbreakable." British Prime Minister Tony
Blair announced that he would bring home more than 1,600
of the 7,100 British troops in Iraq. Vice President Dick
Cheney said that the withdrawal was "an affirmation that
there are parts of Iraq where things are going pretty
well"; he also said that breaking "the will of the
American people" was Al Qaeda's strategy. "They win
because we quit." "Dick was always very realistic," said
Kenneth Adelman, an arms-control official in the Reagan
Administration and friend to Cheney. "I don't really
understand how month after month he gets briefings showing
Iraq's getting worse and worse, and he engages in all this
happy talk." The day after a Sunni imam in Fallujah issued
a condemnation against Sunni militants, a truck bomb
exploded beside his mosque, killing 36 worshippers and
wounding at least 62 more. A suicide bomber at a Baghdad
university blew herself up, killing more than 40 people
and scattering purses, pens, textbooks, and fingers. For
its temporary embassy in Washington, D.C., the Iraqi
government purchased a $5.8-million Tudor-style mansion
across the street from the home of Dick Cheney on
Massachusetts Avenue. The mansion features a built-in
espresso machine, heated floors, soft pistachio carpeting,
and a Jacuzzi. Ted Wells, Scooter Libby's defense lawyer,
gave his closing argument. "He's been under my protection
for the last month," Wells told the jurors, "now I'm
entrusting him to you." Then, he sobbed, "Give him back!
Give him back to me!" Wells then went back to his chair
and sniffled.

It was discovered that Abdul Tawala Ibn Alishtari, an
indicted terrorist financier, gave more than $15,000 to
the National Republican Congressional Committee. "We need
to be careful," said the NRCC in a statement, "not to rush
to judgment." An audit of the Justice Department's
statistics on terrorism released by the Inspector General
revealed that successful efforts in counterterrorism had
been inflated, and the statistics in general were
wrong. Satellite radio companies XM and Sirius announced
plans to merge but faced opposition from the National
Association of Broadcasters. "In coming weeks," said
Dennis Wharton, a NAB spokesperson, "policymakers will
have to weigh whether an industry that makes Howard Stern
its poster child should be rewarded with a monopoly
platform for offensive programming." Residents of New
Orleans celebrated Mardi Gras with brass bands, parades of
Zulu warriors and Day-Glo feathered Indians, vats of
gumbo, and pounds of turkey necks and pigs' feet. "It's
back, y'all," Mayor Ray Nagin exclaimed. "It's back!" At
an ethanol-enzyme production plant in North Carolina,
President Bush slipped into a white lab coat and safety
glasses, hoisted a beaker of clear ethanol, and said that
he "quit drinking in '86." Scientists said
"quasicrystalline" designs in medieval Iranian
architecture indicated that Islamic scholars had made a
mathematical breakthrough that Western scholars achieved
only decades ago and concluded that ancient Iranian
culture was very, very smart.

Congress approved the Defense Department's request to
spend $18 million to convert, in preparation for a
post-Castro Cuba, a U.S. Navy base at Guantanamo into a
shelter that could house 500,000 fleeing Cubans. Children
at a circus performance in Colombia watched as an attacker
shot and killed two clowns, and in Guatemala a dozen homes
and two teenagers were swallowed up by a 330-foot-deep
sinkhole. Twelve senior citizens on a beach excursion in
Costa Rica during their Carnival Cruise Line vacations
drove off two muggers, while a 70-year-old American put a
third in a headlock, broke his clavicle, and strangled him
to death. With its new slogan "The Light is On for You,"
The Archdiocese of Washington launched a marketing blitz
that included ads on buses and subway cars, 100,000
brochures, and a highway billboard in an effort to get
Catholics to confess. Kentucky Fried Chicken president
Gregg Dedrick wrote a personal letter to Pope Benedict XVI
asking him to bless the company's 99-cent Fish
Snacker. Catholic leaders criticized New York City for
distributing 26 million subway-themed condoms, and José,
the first native beaver seen in the city in 200 years, was
spotted swimming up the Bronx River. After widespread
opposition from residents of Utah and Nevada, the Pentagon
canceled its plan to test a large non-nuclear bomb as part
of Operation Divine Strake. It was revealed that the
British Ministry of Defense once hired psychics to find
Osama bin Laden, and Defense Minister Des Browne announced
that Prince Harry, the 22-year-old son of Prince Charles
and Princess Diana, who is third in line to the throne,
would be deployed to Iraq. Phoenix International Airport
security officials using Smart-Check, the airport's new
X-ray vision scanner, could see travelers' weapons,
collarbones, and bellybuttons. Researchers at Johns
Hopkins University confirmed that mothers suffering from
heartburn are likely to give birth to hairy newborns, and
scientists in Senegal watched chimpanzees fashion spears
from sticks and use their weapons to stab sleeping bush
babies. Thousands of spectators at the Rose Monday parade
in Mainz, Germany, watched a float of President Bush being
spanked by the Statue of Liberty.