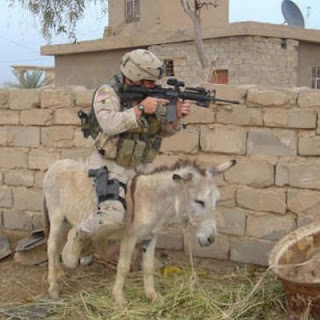 They Shoot Donkeys, Don't They?
This morning I was thinking about donkeys, why war is so expensive, and why Republicans love it so much. And for a while, I was day-dreaming about how to become rich enough to become a Republican and change the party from the inside. The answer was tantalizingly close and featured a non-profit foundation, Jennifer Connelly before she became an x-ray, and a yellow Lotus Elise. Then Lord Baby cut my perusals short with the application of searing pain. He saw me and thought, "Look, Daddy has that far-away stare again. Quick! I've got to snap him out of it...how far will this Tinker Toy dowel go into his ear? Back to reality, Daddy!" The funny thing is, and I forgot this until just now, I am a registered Republican. It seemed safer, somehow, what with the work camps being built.

So. Why does President Cheney (or as I refer to him, The Greatest Field Marshal of All Time) need 245 billion dollars to prosecute war against third-world menaces like Afghanistan, Iraq, and Somalia? I realize they were about to ride their donkeys across the ocean to invade and subjugate us, but I wonder, where does all that money go?

Well, for starters, the gross unit cost of an AH-64 Apache helicopter is about 57 million dollars. And of course, if you want to actually use one, there's pilot training, maintenance, fuel, and support personnel to pay, all before arming it with prodigious amounts of ordnance. A ball-park for what it costs to field each "unit" for awhile is roughly $100 million dollars, which makes one Apache gunship as expensive as a 400-foot-long yacht the hyper-rich now feel required to build. Given that the world's wealthiest people would find ownership of more than one AH-64 Apache troubling, you'd have to consider the price to be pretty steep. And about four of them went down last week.

Put another way, 245 large is only enough to buy about 2,000 Apache gunships and keep them flying around, shooting at suspicious donkey riders for a couple years. Expressed in terms of "asymmetric warfare," the same amount is enough to buy the donkeys. As in, all of them. The whole supply. On earth. Ten times over. Forever. So that's my counter-insurgency plan. Buy all the donkeys. Militarily, it's a no-brainer. Think I'm crazy? Then just try lugging an 82mm mortar tube, base, and one measly case of ammunition across an alfalfa field or up a 12,000 foot mountain pass without a couple of donkeys. It'll make you a peaceful ex-insurgent in no time.

When you figure all the things you need to find guys who've got explosive charges no bigger than a can of Fanta strapped to their donkeys, Toyota Tacomas, and Vespas, it all starts to add up. There are four-engined planes constantly circling high up in the bozosphere, trying to spot the Fanta can carriers on radar. There are satellites floating by and peering down with night vision scopes, registering every bottle, barrel, and bit of trash as a potential explosive device. There are Blackhawk helicopters (don't get me started on them) carrying bottles of water and diaper wipes to Fobbits (people who never leave their Forward Operating Base), there are F-14 and 15s and 16s and 22s and 117s puking thousands of pounds of half-burned fuel out their behinds every hour, there are tanks treading all over hell burning 5 gallons to the mile, and there are Humvees carrying soldiers on their second illegally extended tours, who have to break into people's houses at night and wait to get blown up by remote control. All this costs tremendous gobspittles of moolah.

When two Iraqis stop by the side of a road at night, there's a chance they're planting a bomb. A bomb which was dirt cheap, or free. Recycled, if you will. Our war machine is spinning faster and faster to figure out whether that's an IED they're planting, or they're having a bout of dysentery. Grandfathers have been blown to pieces by 30mm Gatling guns from three miles away because they stopped for a satisfying piss, and took something from a pack off a donkey. Wedding parties have been wasted by precision-strike JDAMs, farmers have been blown off their terrorist tractors. In terms of logistics, this was very expensive; in terms of morality, we are cowards, and are surely doomed. Our designated enemies merely have to squat on the ground to have The Greatest Field Marshal of All Time racing to ask for hundreds more bankrupting billions. At this rate, they can burn us out by frowning.

Roll on, thou deep and dark blue ocean, roll. Ten thousand ships have traveled thee in vain.
Posted by MarcLord at 12:03 PM