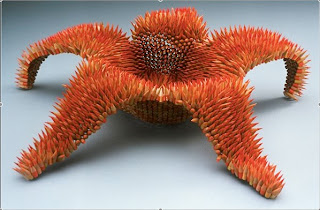 Why Ideology Abhors Intelligence
Did you ever ask yourself something along these lines: "How the Bush Cult could be so densely unobjective? If it were an organism, how could it survive?"

If it were an animal, it might be something like a powerful, relentless, and reflexively aggressive octopus. It would make reassuring cooing noises and effect a charming wiggly dance while drawing close to the food it most delights in: amethyst. When it sensed danger, it would vent its bowels and twirl its arms to spread a noxious cloud while retreating to a safe distance, where it would cunningly arrange its bulk to resemble an anemone. Then it would wait for the threat to leave, and if that didn't occur quickly enough, it would summon its mates for an attack from the rear in overwhelming force. Roll with me as I play with this "Bush Administration as Sea Creature" idea.

Physically fierce as it may be, the "bushtopus" in my mind's eye is indifferent to other species, particularly so when feeding. It will slaughter a school of tuna to get at an ounce of amethyst, and while not blind, it is radically unobservant, remarkably lacking in anything like normal levels of environmental curiosity. It is terribly vulnerable because it is easily fooled and susceptible to traps. It can't help itself. This, along with its limited capacity for adaptation, makes it a prime candidate for extinction if competitors or predators learn to exploit its weaknesses.

Well. That was fun. In real life, I still have difficulty figuring these bozos out because I ascribe some level of rationality to anyone who can form sentences. So, as comprehension of the polymorphic methods and forms of the Bush Administration's stupidity begins to gel and impinge into my consciousness, some new jarring, jerking, bouncing, banging shock of dumbness is pulled, and it's clear I don't understand the organism at all. Sometimes I think, "Satire is dead. Ground sloths weren't that stupid."

But then I snap out of it. Plenty of leaders have been as stupid for as long. I've read about some of them. And, I used to belong to a cult and devoted nearly every ounce of my being to bring converts into it, so I have direct insight into their mental processes and why they act as they do. The problem is, they're raging ideologues who believe their own bullshit. Ideology is powerful, but it blinds the vessel. It cannot objectively behold itself. Regarding the uninitiated, the ideologue expects most of them to "get religion" and convert when the benefits have been demonstrated. Those who refuse the blessings, it considers condemned as unfit, and any dissenters are beyond redemption. The death of someone so pathological is not a cause for sorrow, merely mild regret. "If only they would've woken up, and been saved," is the refrain.

There is very little room in the cult's world-view for understanding the enemy. As a member, it's counterproductive, even dangerous to try because your time and efforts are best spent attending to and demonstrating your own righteousness. Your adherence to righteous doctrines not only reinforces your belief, it maintains and improves your status with the other ideologues you spend almost all your time with. So you don't become exactly blind to your enemies. They just don't interest you.

This is why we had "bad intelligence" on Iraq. This is why we have no intelligence on Iran. Or more accurately, the intelligence is there, but it is covered with a Bullshit Curtain, since ideology will not allow itself to be trumped, contradicted, or led by facts. And when things go badly, ideologues are so fully invested in their convictions that it's too expensive for them to admit to being fooled. That would lead them to doubt, which is a pathetic state. They have three modes of decision-making: selection bias; confirmation bias; and denial.
Posted by MarcLord at 8:22 AM