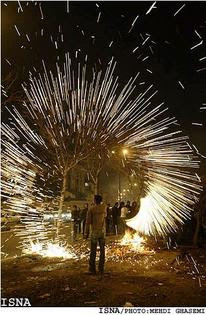 The Lapdog Media is amplifying the idiot-meme that Iran is supplying shaped-charge projectiles to Iraqi militants. As Jeff Bridges said to Julianne Moore in The Big Lebowski: "It's a very complicated case, Maude. Lotta ins, lotta outs." Here's something uncomplicated about it: Iran would never knowingly send weapons to militants in Iraq which could be traced back to them. Money or food, yes. Weapons, no. Iran isn't that stupid. Oddly, the top-ranking US general agrees, and even more oddly, did so in public:

"Marine Gen. Peter Pace, chairman of the Joint Chiefs of Staff, said yesterday that he has no information indicating Iran's government is directing the supply of lethal weapons to Shiite insurgent groups in Iraq.

"We know that the explosively formed projectiles are manufactured in Iran," Pace told Voice of America during a visit to Australia. "What I would not say is that the Iranian government, per se, knows about this."

"It is clear that Iranians are involved, and it's clear that materials from Iran are involved," he continued, "but I would not say by what I know that the Iranian government clearly knows or is complicit."

The Iranians are surely enjoying the "failed policy" in Iraq and helping it fail faster and harder where they can. But it's far more likely the mullahs have expressly forbidden their military from providing anyone in Iraq, Shia or otherwise, with weapons. Doing so either risks or detracts from their political objectives. The weapons in question may be from Iran, but could've been bought in any number of places, or slipped from one helpful cousin to another.

In plain language: Iran wants the US in Iraq so long as the net effect is bleeding the Sunnis and suppressing their long-time Baathist enemies. They don't want to screw it up yet, because it suits their purposes nicely. That's why Iraq is most stable in the south, where Iran's surrogates are thickest. For now, it wins by waiting, and by grooming and maintaining a credible victim status in preparation for a US/Israeli attack, a policy it is consistently following. The pre-aggrieved victim status is a political necessity, and trumps any tactical military fun to be had at US expense.

I don't think the White House is particularly serious, either, not about inflating these shaped charges into a real casus belli. Focusing on EFPs and shells which are labeled with a Western alphabet and date system, and which were probably bought on the open international weapons market, is appropriately preposterous, true, and fits the distinctive White House style. But there's no harm in a little more tar-slinging, and it opens up a line of defense against actual weapons being sent in the future. The current PR mantra seems pointed less seriously at Iran than at increasing pressure on the most powerful man in Iraq, Moqtada Al-Sadr, to bring him around to a more partition-friendly stance.