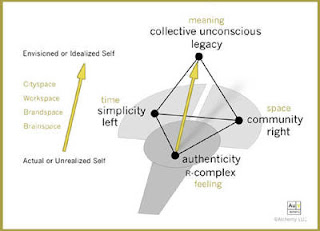 The Leader With A Thousand Faces: Ancient Archetypes And The 2008 Presidential Elections
A prince wounded by the treachery of usurpers was banished to the wildernerness, where he became a hairy man. People said they could hear his voice sometimes out in the wilderness, prophesying nonsense. Only a curious little orphan who was hungry one day started going into his leaky old rowboat to fish and listen to his stories. Then one day the hairy man's prophecies started coming true, so the villagers hurried back to find him, and said, "Come, speak to us, tell us the secrets so that we may be saved. All else we ask of you is that you bathe." The prince thought about the villagers offer very hard, and finally said, "Ok. I'll bathe. But the beard stays," and he came back to claim his true throne.

The archetypes above are straight out of Joseph Campbell's "The Hero With A Thousand Faces," harking back to the tales little children have heard since stories were only remembered, and not written. It's a powerful archetype, a fable of leadership and wisdom watered down into our popular culture as the storybook comeback. Al Gore fits it.

He's going to have a hard time not running for President, because people are begging him to. Not just little people, either. Big people. Hillary Clinton is great at raising money from special interest groups, hundreds of millions, but each check has a ball and chain attached. Al Gore could raise $2 billion from just two individuals, with no strings attached other than "go get our democracy back." I don't mean to say an election is all about money, only to indicate how much it matters where the money comes from, and how much more energy and passion would be behind Gore. If he entered the Presidential race, money would not be an issue.

Back in late 2000, when only an election was in the balance, and not the earth, over lunch I told my entire development team that if the election was decided for Bush, they should seriously consider making plans to leave the country or obtain a second passport. It was something along the lines of, "I don't know exactly how bad it'll be, but Dubya's going to be worse than I can imagine." Never having voted in an election, and having little knowledge of GWB or Al Gore, and no qualifications as a political prognosticator, they were still kind enough to not laugh. But that's how portentous the 2000 election seemed to my intuition. It's impossible to say what would've happened if things had gone differently, and as another Gore (Vidal) says, there's only one political party in the United States, and it's called the Property Party. That may be. But good leadership matters. You can't have good governance with bad leadership.

The alternate reality game above is pretty powerful stuff, and if Gore steps up to run, I'm not the only one who will think, "No. Really. What would have happened if Gore had been sworn in back in 2001?" Here's what I wouldn't be alone in thinking: 9/11 wouldn't have happened. The Global War On Terror wouldn't have happened. We wouldn't be in Iraq. The United States would have an energy policy. We wouldn't be torturing US citizens. We wouldn't be playing the next rounds of "Double That Deficit" and "Flush The Country Down The Toilet." I'd probably be able to find a good set of solar panels, put them on the roof of my house, put a windmill in my back yard, and get a tax break for it. The floundering US car companies might even have developed some good hybrid vehicles by now.

Maybe that's all dreaming. The important thing is, it's natural conjecture which will occur if, and more likely when, Al Gore decides sometime in 2007 to run. Love him or hate him, believe you or not in inconvenient truths, Gore learned much in the wilderness, and he likes it there. He can take or leave the Presidency, and will only run on his terms, which means he'll be genuine. If he runs and is not shot, he will be elected President. And I don't think he would be: Gore offers what might be called "Better Energy," which is a solution corporate elites, public companies, private citizens, utilities, and politicians can all line up behind. It's a New Deal for what we'll use to power the country.

But back to our archetypes. What of the curious orphan? Barack Obama was born for the part, and would make an excellent Vice President. Indulge me for a moment. Ralph Nader as Energy Secretary. Dennis Kucinich as Secretary of Defense. Ha. I really am dreaming. There are a lot of hurdles here, and even more trenches. But what be dreamt, may be done.

Oh, and Hillary Clinton? I'm not sure what Joseph Campbell called her archetype. But there is a more recent perfect fit for her: she was was born to play Evita Peron. Or, if she would accept the role, a Secretary of State who could out-do Kissinger on his best day.
Posted by MarcLord at 12:01 PM