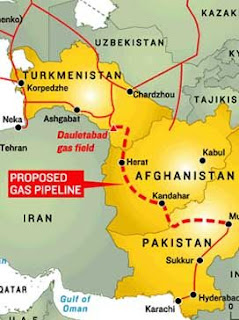 Who Really Validates Al-Qaeda?
Dick Cheney accused the Democrats this week, in their playing origami with legislations which would place limits on further Deciderations in Iraq/n, of giving aid and comfort to Al Qaeda. OK. But who amongst us really knows exactly what Al-Qaeda is? Who knows its history, and all its branches? At this point Al-Qaeda is a manikin wearing a coat of many colors in anti-imperialist folds, not some fixed muslim monolith but a scarecrow of morphingly mythical convenience. In Dick Cheney's mind, Al-Qaeda isn't just a rag-tag bunch of RPG-toting muslims. Anyone who hates American policies enough to take action against them qualifies. Including Congress.

What is decidedly not mythical is that Al-Qaeda was nurtured by US foreign policy needs and financed by US greenbacks. In Afghanistan starting almost 30 years ago it was given billions of dollars of aid and weapons. Back when Al-Qaeda was known as the mujahedin, my first prospective, suit-and-tie job was to supply it with lethal arms against the Soviets. Al-Qaeda was the supply base in Islamabad, which was home to the largest CIA station in the world. Al-Qaeda was in large part funded by the efforts of an oil-friendly Congressman named Charlie Wilson. He was from Texas, and Al-Qaeda was funded as an anti-Soviet vehicle because Big Oil didn't want the Russkies in Afghanistan.

Many of those Pakistani and Afghani anti-S0viets are now called the Taliban. The Taliban is Al-Qaeda's three-headed step-child, and was created with the intention to fight it by idiotically hopeful managers of Big Oil. The Taliban was never a well-controlled asset, and it escaped from the laboratory like a muslim Frankenstein. But how could the Taliban be a creature of Big Oil? Jesus del Norte at Church and Empire explains how and why:

In April 1992, a prominent Mujahideen commander Ahmed Shah Masood (Lion of Panjshir valley) moved into Kabul. Najibullah then took refuge in the UN compound in Kabul. Between 1992 and 1996, Afghanistan was in semi-anarchy, as the country was carved into individual fiefdoms by the warlords.

In 1996, Unocal of the U.S. and Delta Oil of Saudi Arabia became interested in mineral wealth of Central Asian republics of the former Soviet Union. The ideal route to bring oil from the Caspian sea and gas from the Daulatabad gas field (in Turkmenistan) would have been via Iran. Because of US policy of isolating Iran, Unocal and Delta Oil thought of building a pipeline via Afghanistan.

Pakistan created the Taliban with funds from Saudi Arabia and UAE. They took into their rolls thousands of Pasthuns who had enrolled in madrasas adjoining Afghanistan. Because these men had never taken part in war, they were secretly trained and led by officers from the Pakistani army. Arms and ammunition including tanks, howitzers, and other military vehicles were provided by Saudi Arabia and Pakistan. In 1996, The Taliban crossed the border into Afghanistan. Initially, they were dismissed as a joke but in September 1996, they had captured Kabul.

However, the Taliban could not occupy all of Afghanistan. (They did occupy 90% of it at one time.) At one point when the Taliban was overstretched and the Northern Alliance was poised to attack, the Clinton administration despatched UN envoy Bill Richardson and Assistant Secretary of State Karl Inderfurth to Afghanistan to broker a ceasefire and an arms embargo.

So, once again, another group of terrorists derided in Western media and being chased by ignorant armies was originally bank-rolled by oil and gas lobbyists. And if anyone came here fom the conservative wing and read this far, I'm not "blaming America first." I'm blaming dumb managers who should've known better. And guess who met with the Taliban when they traveled to Houston in 1996 to negotiate a pipeline deal with Unocal? That's right, folks. Mr. Aid and Comfort himself. The Pope of Hydrocarbons. Dick Frickin' Cheney.
Posted by MarcLord at 5:33 PM