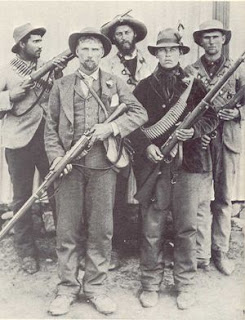 Quadrillage & The New "Gated Communities," Pt. II
Remember the Vietnam euphemism "Strategic Hamlet?" It's funny how ideas are recycled in different market-ese. Strategic Hamlets refer to counterinsurgency efforts in South Vietnam which relied on massive population transfers. Peasants were relocated into self-constructed walled forts in order to identify, isolate, and kill Viet Minh insurgents. The program enjoyed considerable initial advantages, including almost unlimited funding and expert leadership under Robert Ker Thompson, who had a record of success against communists in Malaysia and Southeast Asia. 8.5 million peasants were re-housed into more than 7,000 hamlets in 28 months, with CIA-trained death squads killing untold numbers of Viet Minh sympathizers. Except the tried-and-true method didn't work, and Vietnam's President Diem was assassinated in 1963.

So now it's called "Gated Communities." This is a big gamble. If the game were Texas Hold 'Em, it's a bet on drawing an inside straight flush on the last card. Long odds. To recap, the idea behind the "Surge" follows classic counterinsurgency doctrine as re-hashed by the new ground commander in Iraq, the intellectually inclined General David Petraeus, whose name oddly befits a Roman prelate. The idea is to cleanse Baghdad of insurgents by sectioning off its neighborhoods, putting gates around them, then going through them house by house to identify insurgent families. Quadrillage is the term the French used for it in Algiers and early South Vietnam. Insurgents will be isolated, then neutralized by shipping them and their supporters to camps, prisons, or graveyards. A mixed local command is set up of mixed Iraqi troops and police backed by a central core of US forces with responsibility over their gated section. The local command begins to employ people to pick up garbage, make repairs, and put snitches on payroll, in this way winning over the populace, who in turn make the insurgents unwelcome. If anything gets out of control, overwhelming firepower will be called down on the trouble.

In Part I of this post, I promised to explain why quadrillage probably won't work now. It probably would've worked if employed immediately after the invasion, especially if it relied on the Baathists who had run the country for 40 years. At this point, however, it's going up a steep hill, and alerting the insurgents to the strategy 3 months in advance doesn't help. And I said General Petraeus isn't the genius people think he is; for example, he is fond of holding up Tal Afar as a shining example of successful counterinsurgency. Tal Afar was the patrol area of one of the military's leading lights, Colonel H.R. McMaster, who wrote the provocative book "Dereliction of Duty," and is credited for coming up with the template for taming the bad guys. While Petraeus and McMaster are letting people give them attaboys and manly pats on the toosh, here's what Matt Taibbi quotes the mayor of Tal Afar as saying last summer, in his Rolling Stone article, "Waiter, There's A Surge In My Soup" (hat tip to Bruce of The River Blog for surfacing it):

I was in Tal Afar's "genuine success" story over the summer. It was such a success story that the city's neurotic, hand-wringing mayor, Najim Abdullah al-Jubori, actually asked American officials during a meeting I attended if they could tell President Bush to stop calling it a success story. "It just makes the terrorists angry," he said. At the meeting he pointed to a map and indicated the areas where the insurgents held strong positions.

Due to length, I'll follow up with a Part III. Graphic above is of Afrikaner commandos in the Boer War, just as a reminder that not all insurgents are brown-skinned communists.