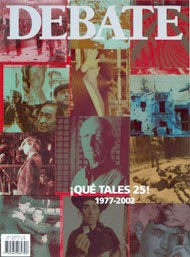 A Debate In Da House, And Unhinged Resolutions
To be frank, Congress inherently bores the cyclotronic piss out of me. It's about as exciting as a slit wrist in a hot bath. Really. I wouldn't know procedure there if all the Pugs and Dims pulled up their collars, put their ties around their heads, and started singing "I'm a little teapot, short and stout." If the Sergeant-at-Arms fired off a 15-round clip at the gallery for reading manga comics, I'd think, "Mental note: send Japanese porn to Newt Gingrich." The worst thing is, I've taken classes from Congressional staffers about how to write briefs, have had dinner in a notoriously conservative Senator's home (yes, the potted palm still remembers me), and I would've served as an intern if I had only known enough to deal crack to co-staffers to compensate for the crappy pay.

I'm coming clean here. Congress confuses me. I'm not ashamed to admit it. What's to understand? 99.99/100ths of Congressional discourse is fake, endlessly regurgitated, and it's bow-oo-oo-ring. All the juicy stuff goes on behind the scenes. and you can't see it unless you're behind the orgiastic veil. Sure, there are some points when humanity peeks out, like when that new insane Church Lady from Ohio, Mean Jean Schmidt, called out Jack Murtha as a treasonous coward and threatened to singe him with the wrath of Almighty God. That was some plain speaking, finally. (Conveniently, she wore a polyester Old Glory draped over her entire body, so we knew what to think.) But usually, in Congress, the truth is so precious it is protected by a panoply of lies.

It's been a looooong time, even for a neo-fuddy like me, since there was a real debate there. And this week, there was something drawing timidly near to debate, like a dewy fawn-specked Bambi thirstily emerging from the forest to taste a still, clear pond, only to be frightened back into the brush by the "Joust of the Well-Rehearsed Talking Points." The Dims: "We will never, ever cut funding for our beloved troops, but the sinkhole you've created is as deep as your distended rectums." The Pugs: "Halting escalation will blow up Lincoln, Nebraska, and the number of the Beast is six hundred, three score, and six."

The important thing for us is, we saw the fawn of debate. Though startled and justifiably frightened, Bambi still exists. Hope is not lost. Lots of folks fault the Dims for engaging in the talking points, but at least they're being tactically smart. Focusing on a non-binding resolution is focusing on something that can be won. And it's not non-binding. It's on the record. It sets a stake in the ground, and builds on the slimmest basis for impeachment. Do I think such a devoutly wished possibility likely? No. But I shelter the spark of hope, and that can be fanned into flames. Believe me, if I still have hope, the Dims are doing something right.

When a big wheel is rolling down a hill towards you, it's hard to stop. If you stop it, no small feat, the first push back up the hill is the hardest. If the Dims win this resolution, all they establish is stalemate. And stalemate is better than collapse. After this, they can look for the next little skirmishes which can be won, and built upon.
Posted by MarcLord at 8:25 PM