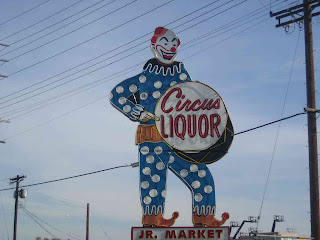 Introducing: Prozac The Clown
Several Hordies have taken the time to blame me personally for throwing them into spiralling black funks of suicidal depressions, stemming directly from one of my recent book reviews. Hey... guys: look at it this way: at least I saved you from reading the book. Plus, it was on Oprah's Book Club, it won a Pulitzer Prize, and I even told you about the happy ending! Humanity survived in the end, didn't it?! And can I help it if Lord Mother watches Oprah, fer chrissakes? I do feel your pain, and so have decided, just for you, just for today, to become...Prozac the Clown. I am putting on my fake nose right now.

Toot, toot! Hey kiddies! Do you know who Scooter Libby is? He's a clown, too! Only he's a very special clown. His job was to make the President happy. And that's why he was called Scooter Libby, that's right, Emily! Scooter got his federal prison inmate number assigned today. That makes Prozac feel very sad for Scooter because he and many of his friends are fellow clowns. But it turns out that clowns can go to prison, too. Even if they work for the Bush Administration. Having the President's favorite clown go to prison doesn't make sense to poor Prozac, it makes his head hurt, oww-ie, so Prozac will believe it when he actually sees it. Can you say, "the jury is still out?" Sometimes Prozac says that when he doesn't know if something is finished yet. The jury's still out! The jury's still out! Hee-hee! Even so, just in case, Prozac has had a T-shirt made for his friend Scooter to wear in prison:

Haa-ha-ha-hee! Toot-toot! Kiddies, maybe you've heard your parents or their friends say funny stuff like this:

"If the liberals would stop spending so much money on midnight basketball, free abortions and treasonous investigations of the Executive and Vice-Presidential branches of government, we could afford to build more small-town prisons and boost the local economies."

If you're like Prozac, you know that grown-ups can be ree-eee-ally silly sometimes! This stuff about midnight basketball and treason is just fancy-talk, kind of like when they spell things with letters so you can't understand. What they really mean is that they're freaking out and will beat you with a shoe after you fall asleep. And what's that mean? Right, that means they need a Time Out. Say it with Prozac: "Mommy, you need a Time Out." "Daddy, you need a Time Out." Good! You're such wonderful boys and girls. Oh, and if any of them touch you in or around your "bad places," then you come tell Prozac right away, ok? Then we can report them to the state and send them to prison to keep the economy boosted!

Now, kiddies, Prozac has to go really fast to visit another party, but when you get home he wants you to get out your dictionaries and look up this word: immigrants. Im-mi-grants. Will you promise Prozac to do that? Good! Because then we can talk about it next time! [Prozac mounts brightly painted orange, lime, and purple scooter festooned with pom-poms.] Bye-bye kids, and remember the Prozac Promise: Take Your Ritalin to Be a Good Citizen!
Posted by MarcLord at 1:05 PM

Don't forget kids that Crusty the Clown went to jail for a long long time. And never trust Sideshow Bob!