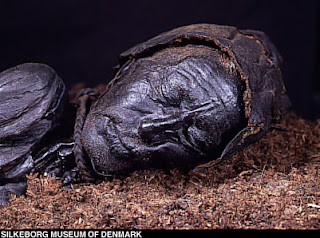 Current Reading: People Of The Wetlands--Bogs, Bodies, and Lake-Dwellers
Does that title have you excited yet? Enthralled? It's ok if it doesn't, but the picture should have you at least a little bit curious. It's one of the world's most famous naturally preserved mummies. I suddenly had time to read the book it was in after seriously aggravating a previous neck injury last week, which precluded all non-essential tasks, like most blogging. Nerve pain radiated out from my upper spine, cramping up everything from there to my chest, rib cage, lower back, through my armpits, and having me retching from nausea and missing sleep much of the week. Never knew armpits could cramp up? They can. And, no, they're not pretty when they do.

As there are about 50-100 posts to catch up on, a book post, being relatively simple, seemed like a good way to start. Plus, I empathize with the poor gent in the picture, which is featured on the cover of the book. He, you might say, ahhh, died of his neck injury. My nerve paths may have complained, but the mummy, now he had some urgent issues. The braided leather rope around this man's neck dug deep furrows into the skin under his jaw and at his throat, indicating he was hung and left dangling for some time before his body was thrown into the Tollund bog in Denmark around 2,400 years ago. He was blond, and he had not shaved in at least a week.

Many of the mortal coils preserved in bogs around the world were, like Tollund Man, the result of executions. Thousands of bodies are preserved in the bogs, along with artifacts, tools, boats, clothing, and objects hinting at technology and customs at the boundaries of history. No place does bog forensic evidence point to execution with such prevalence as in Northern Europe, which in composite tends to confirm Tacitus when describing Geman tribal justice in the late 1st century A.D.:

- traitors and deserters are hanged on trees;
- cowards, shirkers, and sodomites are pressed down under a hurdle into the slimy mud of a bog;
- wives guilty of adultery are taken from the house, stripped, shaven, and flogged by their husbands;
- criminals are taken to their place of execution, and the body from the execution, on a cow-hide so as not to touch cultivated land.

Geez. These precursives are only encouraging in contrast, and at that, there are many here among us now whose views do not provide very stark comparison. Nonetheless these mummies and bog artifacts convey to those of us with northern European roots the first views of our illiterate ancestors. Their sturdy and utilitarian clothes, their great skills with wood and leather, their often under-nourished physical condition, the food in their bellies (often gruel containing a startling variety of seeds and non-local grasses), even their very flesh and hair. All but their blood. As the Irish dramatist R.B. Sheridan once said, "Our ancestors are a good kind of folk but they are the last people I should choose to have a visiting acquaintance with."