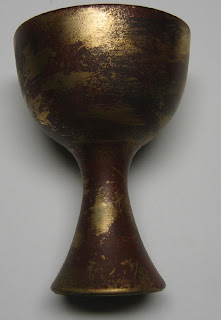 The Land And The King Are One
It's all connected, brothers and sisters. The secret of the Holy Grail is that the land can be no better than its king. When more than 4,500 letters and packets aren't delivered to gravely wounded soldiers at Walter Reed hospital, as Hope reports at Deep Confusion, it's part of the kingdom. When a woman begs for help in an Emergency Room, falls to the floor and vomits blood while while nurses walk past ignoring her for three hours and she dies, it's part of the kingdom. The secret is simple. It comes down from the top. From the King's attitude.

LOS ANGELES - When Edith Isabel Rodriguez showed up in the emergency room of an inner-city hospital complaining of severe stomach pain, the staff was already familiar with her.

It was at least her third visit to Martin Luther King Jr.-Harbor Hospital in as many days. “You have already been seen, and there is nothing we can do,” a nurse told her.

Minutes later, the 43-year-old mother of three collapsed on the floor screaming in pain and began vomiting blood. Employees ignored her, and she was soon dead.

As the article makes clear, many nurses walked past the vomited blood, ignoring the woman writhing on the floor. It's what is deemed permissible, it's about what the overarching King or Queen-conscience calls good or bad. Because the current occupants don't give a damn, there are no consequences. Maybe the woman didn't have health insurance, so of course it was ok to not see her. Hospitals have to make a buck, after all, and the profit motive is all-powerful. But even if she had the best health insurance, I suspect the same thing could've happened. I've seen similar things with my own eyes.

Once, years ago and not too long after 9-11-01, Lord Wife got blood poisoning from a bite inflicted during a freak dog-sitting accident late one night. It was spreading up from a puncture wound on her wrist, spreading by the minute up her arm as we sat in an ER the next morning, a Saturday morning in New York City. Starting at dawn, you could see the redness start to travel in an ugly inflamed red up toward her heart. Because it was a weekend, there was no place else to go but to an ER. While we waited in the ER, during the first of our 4-5 hours there, a pregnant woman staggered up to the desk and begged, "Please, I'm going to have a baby, the pain is so bad, please help." The desk clerk yelled at her and pointed back to the chairs, "I told you once and I'm telling you again, ma'am, go sit back down until we call you." The woman leaked her baby's fluids on the floor next to us, hoping for help on a Saturday morning, and like her, we waited helpless. The desk staff were waiting for their shift change at noon, and no patients were being called. The staff was clicking on computer keyboards.

Unlike the woman about to give birth, and paradoxically, we were taken into a spare pediactric room where we waited for a couple more hours. An Indian internist came by and told my future wife by that afternoon, "We might be able to save your arm." Relieved a doctor was finally there, I asked for a bathroom, and he pointed me to the main lobby. I went left and right and left and right again, and was at the bathroom off the main entrance to one of the more reportedly competent hospitals in the US.

I entered the restroom off the main lobby, and upon entering I saw a sixty-ish man, probably Latino, leaning over the sink. He was in shock and leaking steady streams of blood from the left side of his upper chest down his formerly white shirt. He also had a head wound over his eye. I desperately had to pee, and did so. While I did I watched him. He stayed patiently bleeding, moaning, ans swaying unsteadily over the sink. I think he intended to wash his face and shirt, but wasn't up to the task; it might have been a knife. It might have been a piece of a steering wheel, or, less likely, from a small-caliber gun. I tried to talk to him, but we couldn't communicate, and by his moans and by pointing I held his body and he led me back to where he had come from, towards the main entrance, retracing the blood from his wounds which had spilled a trail on the floor from the main doors to the the admittance desk, and then to the bathroom. He had walked to the desk and been sent away.

I marched him up to the admittance guard and said, "You take care of him now. Help him. Your problem." The guard also apparently didn't speak English, and was angry, but saw the blood, coursing, and pushed some buttons. I gestured to the dots of blood coming in from the entryway, pressed the bleeding man in shock to the desk, stared daggers, and shook my head. Then I left. No one took him from me. I don't know if he got care. There was no one there who gave a damn. I couldn't help wondering who did, but had to go back to my fiancee.

There were no sheets or blankets when we finally made it to the hospital bed, and antibiotic IV dripping from her arm at 11PM. The bed was utterly bare to the mattress, and the nurse at the night-station ordered me to go to the linen closet to make it up. In the closet, there were no blankets, and there were only a few sheets. I made the best I could do with 3 sheets, and slept in a chair by the foot of the bed. About then, someone vomited in the hallway outside the nurses' station, where it stayed for 8 hours and I traipsed around it 3 times during that night, while I kept checking the state of my wife's festering fore-arm.

A 92-year old woman raved incoherently in the bed next to us. She finally received some special treatment after the next morning's visit from her Russian mafia son from Brighton Beach, who looked like Tony Soprano and seemed to effectively threaten and bribe the nurses. Her treatment improved immediately, and the nurses became very sweet. Ours didn't, and we still owe more than $4,000 which our insurance hasn't paid, and which we refuse to pony up. On one instance an intern was sent in, looked at my fiancee's chart, said not a word, and left. That chart note was charged out at $770.

Update: Our last trip to the ER was with our baby son, who had managed to fall on a windowsill and put his tooth into his upper lip. I was holding him at admitting, writhing and shrieking on my lap, impatiently answering questions and transferring insurance information to a thoroughly immune, keyboard-tapping clerk. Then she asked me a question which sent me 'round the bend: "What is your religion?" I responded: "Religion?? Look! Are you going to give my son care or not?" As it turns out, they did not provide care. The doctor in the ER, fearing liability, literally dared not touch our baby. The doctor promised him a painkiller, but then did his best to disappear, and in two hours there my son received not so much as an ice cube while the doctor cowered behind the nurse's station. At some point my son's tooth finished pushing out through the front of his lip, and that relieved his pain somewhat. The hospital, known as one of the best in the country, had decided to call a pediactric othodontic specialist who was coming off shift from another hospital in a couple of hours, so rather than deal with us at all and risk liability, they let us wait. Failure to provide care is a liability, too.

We are locked in systems which, more and more, day by day, view us as cattle. The only things which matter are the organizations which have become immortal. The MSNBC article about Edith Rodriguez says the hospital "may" lose its license. Somehow I doubt it will. The rot pervading every system in this country is coming from the top.