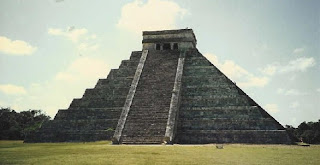 A Dying Order
Thanks to Bruce at The River Blog for finding this sign of hope out in the blogosphere:

"Change is taking root. I think that the part of humanity that resists change is terrified by it, because it is so clearly unstoppable. The Earth herself has joined the struggle. All the surveillance, all the war, all the repression, are the last desperate attempts by a dying order to hold onto power.

The revolution is coming, and when it does, it will come like water: soft, flexible, yielding - but unstoppable in its power."

We are still enthralled by Mayan priests who sacrifice captives on the altars of our pyramids to appease the sun. I hesitate to say where it's from, but a lot of people are realizing what's going on, and that a big change is going to come. Realization is the most important thing. The Wall Street Journal, Meet The Press, The Washington Post, and the Main Stream Media sacrifices aren't helping. Study the water, and the forests. The Mayans who left still live today.
Posted by MarcLord at 11:34 PM