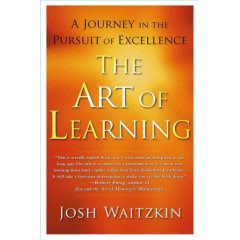 Current Reading: The Art Of Learning
Learning is hard. It's mostly a lonely, unsparing endeavor. It involves hard struggles with your pride, your cruzzled ego, the ugly things in your soul and the nearly unwinnable arguments with your giant, excuse-filled demons. Not learning is easier at first, but it gets progressively harder. Someone said that the definition of insanity is performing the same failed behavior over and over again while expecting a different outcome, that is a successful, result. It's true that lotteries can be won on rare occasion, and I don't discount the hope that buying the tickets provides. But real learning is a more reliable way up, even if it proceeds by a shovel strike into hard ground followed by each excruciating shovel pull. Learning is a conscious decision to countenance heartbreak face-to-face.

Josh Waitzkin, the subject of the film 'Searching for Bobby Fischer,' is one of the best learners on earth today. My great friend and prophet Still Life Living (SLL) sent me The Art of Learning as a present. And probably as a curse. SLL is on a spiritual quest which I respect and have sometimes shared, and he has sprinkled more than a few grains of sand into the incompletely clamped shell of my oyster crevice. I have so much to thank you for, V. And thanks for this book.

Josh Waitzkin was a chess prodigy. Chess caught his imagination while walking through Washington Square with his mom when he was 6 and he saw the park denizens playing speed chess. He sat down at a table and didn't look back for a dozen years. He drew Gary Kasparov in an exhibition when he was 13, the youngest player ever to do so. He was the US Chess Champion 8 times before he was 16, was the youngest International Master, and his style of play thrived on chaos and intuition. He was very much like Bobby Fischer, only more sane and better socialized. His parents were loving and ideally supportive, and that was a tremendous advantage. But even so, his quest for excellence drew him to the edge of sanity, and he wasn't ready for celebrity. He turned back from Bobby Fischer's path.

After turning away from chess, he sought peace and refuge in a martial art. Tai Chi. It turned out to be like chess, only with his body and neurons. There are two championships of Tai Chi held in Taiwan every couple of years, and in relatively short order, by learning from each loss, he went on to win both Taiwanese titles in 2004. This is as unlikely an accomplishment as a city in Japan fielding a team to beat the Pittsburgh Steelers in the Super Bowl. Waitzkin re-wired chess moves into his body, rapid-fire, reading the smallest moves and intents. He addressed his weaknesses to become the top martial arts gladiator in the world. Like with chess, only better, he learned numbers in order to forget numbers, and learned forms in order to leave those forms behind. He learned the rules so he could break them. He was able to read the minds of his opponents, and despite their greater athletic gifts, he achieved the impossible in Taiwan, and won their Super Bowl.

In another discipline some time ago, I had the privilege to know a virtuoso. He was possibly the best in the world at what he did. His code name was Krull. By working within the rules and being aware of my weaknesses, I came to be his leader, but I wasn't as good as him. Not anywhere near. He was always great, and could master situations I chose to avoid. He was a martial artist, and his talent was pure. Head-to-head, he would probably have beaten me seven times out of ten. I short-changed myself by fearing his skill, and then compounded it by accepting a role as his manager. I'm not beating myself up for doing a good job or working the system. I only wish I'd left my ego at the door and had been brave enough to learn more from Krull, because he had so much skill to teach.