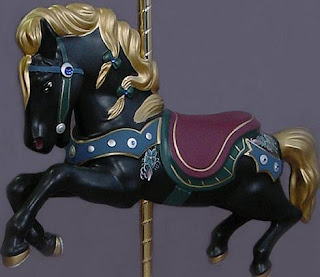 Dead Heat On A Democratic Merry-Go-Round
Barak Obama has drawn even with Hillary Clinton in a USA Today/Gallup Poll. Other polls still show Clinton with as much as a 12-point lead, but "increasingly huge crowds" are showing up for Obama sightings. One such gathering was in Seattle last Friday, which I couldn't go to because of a business dinner, because its $100, $200, and $500 seats were completely sold out before I even heard about it, and because Lord Wife was busy flying to the other side of the country for the weekend, leaving me to contend with the overwhelming enthusiasms of Lord Running Boy.

Reviews of Obama's performance in the New Hampshire debate were decidedly mixed, but then debate isn't his natural milieu. Talking with voters is his stomping ground. Amongst Democrat-only voters, Clinton's lead narrowed to 5 points in the same poll from a 17-point lead in mid-May. Obama captures more swing Republican votes. (Mental note: bigotry has always made pragmatic exceptions.) The momentum is clear, and the Clinton Juggernaut must be contorting in expensive spin-spasms.
Posted by MarcLord at 8:56 PM