Washington, whose appearance marked the first time the military leader and statesman had spoken publicly since his 1796 farewell address in Philadelphia, is the latest in a string of retired generals stepping forward to criticize the Iraq war.

"This entire military venture has been foolhardy and of ill design," said Washington, dressed in his customary breeches and frilly cravat. "The manifold mistakes committed by this president in Iraq carry grave consequences, and he who holds the position of commander in chief has the responsibility to right those wrongs."

Washington noted that while Saddam Hussein was an indefensible tyrant, that alone did not justify a "conflict that seems without design or end."

"The Iraqi people did suffer greatly under unjust rule," Washington said. "But in truth, it is the duty of any people that wishes to be free to fight for its own independence. Had France meddled in our revolution beyond the guidance and material assistance they provided, I should think similar unrest would have darkened our nation's earliest hours."

Washington made the cable news rounds, telling Wolf Blitzer that the war was a "tragic mistake for our nation." 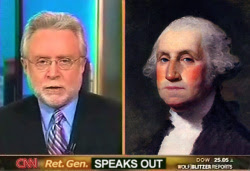 The Virginia-born Revolutionary War veteran and national-capital namesake also expressed his worry over the state of the American militia, the unchecked powers of the executive branch, and the lack of a congressional declaration of war.

"The very genius of the American presidency is that it is an office held by an elected representative of the people, not by a monarch who can rule by fiat and enact policy at will," Washington said.

The retired general asserted that many of the current problems in Iraq could easily have been predicted by wiser civilian leadership.

"I can say from personal experience that even a malnourished force with feet clad in rags should not be underestimated, even by a far superior power," added Washington, who has disavowed further comparison between the Iraqi insurgency and the American colonists. "There is nothing a committed fighting force cannot accomplish if bolstered by the strength of its convictions."

"We're very happy that someone of General Washington's stature is speaking out," said Jon Soltz, cofounder and chairman of VoteVets.org. "He has impeccable conservative credentials, extensive foreign policy experience, is a true citizen-soldier with a proven commitment to his country, and, if that's not enough to get Bush to listen, he's the face on the dollar bill."

However, White House response to the former general's criticism was swift and sharp. Spokesman Tony Fratto dismissed Washington as "increasingly irrelevant" and "a relic" who "made some embarrassing gaffes" during his own military career, such as the Continental Army's near destruction in the Battle of Long Island in 1776.

"The general's reckless and irresponsible comments show that he clearly does not understand the realities of 21st-century warfare," Fratto said.

"I don't care who you are—or if you cannot tell a lie—it's un-American to question the president in a time of war," Sean Hannity said on his radio program Monday. "Plus, I find it very interesting that a man who owned slaves and sold hemp thinks he's entitled to give our Commander in Chief lessons on how to run a war."

Toward the end of his Meet the Press interview, Washington expressed fears for the future of Iraq, Middle East policy, and America itself.

"These convoluted foreign adventures were not what I envisaged for my young nation," Washington said. "Certainly the citizens of the republic deserve better than this. Had I but known this was the fated course of my country, I might not have found the strength to liberate Her from the mantle of King George."

(Courtesy of the inspired Onion.)
Posted by MarcLord at 11:11 PM