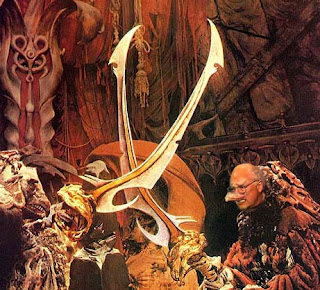 They're not even bothering to write memos to claim power anymore. They're just making stuff up. Government is gone. It has been replaced by the Skeksis, the corrupt, vulture-like rulers of Planet Thra. In case you're not familiar with Thra or the Skeksis, they're from 'The Dark Crystal,' an allegorical movie about the Bush Administration. They inhabit a castle and feed off the world's energy and churn out ruin and decay. Dick Cheney is in the Skekna, or slave-master, as you can plainly see in the photo above.

Yesterday, White House spokeswoman Dana Perino defended Dick Cheney’s claim of existing outside the Executive Order (EO) that governs the preservation of classified data, a directive which applies to all Executive Branch officials.

Dismissing the topic as “a little bit of a nonissue,” Perino said President Bush “gets to decide whether or not [Cheney] should be treated separately, and he’s decided that he should.” She then suggested there was textual evidence in the 2003 Executive Order to support the claim that it was not applicable to Cheney:

PERINO: If you look on page 18 of the EO, when you have a chance, there’s a distinction regarding the Vice President versus what is an agency. And the President also, as the author of an EO, and the person responsible for interpreting the EO, did not intend for the Vice President to be treated as an agency, and that’s clear.

Last night, MSNBC’s Keith Olbermann reported that his staff fact-checked Perino’s claim, looked at page 18 of the order, and found Perino’s claim to be false:

Sec. 6.1(b) of Bush’s 2003 executive order governing classified material explicitly states that it applies to any “‘Executive agency…any ‘Military department’…and any other entity within the executive branch that comes into the possession of classified information.” Olbermann concluded that Cheney’s defiance must lead to the following conclusion: “He’s no longer an entity of any kind.”

(Courtesy of Think Progress and Keith Olbermann)
Posted by MarcLord at 2:12 PM