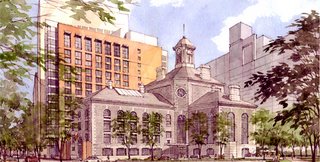 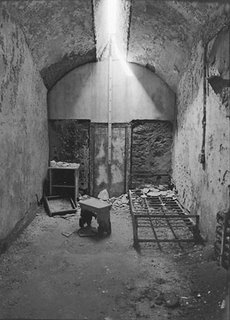 Sun On The Charles, Liberty And Jail
I took the Red Line from Alewife station towards Boston's Logan Airport yesterday, just my luggage, my handheld and me after they kicked us out of the hotel at 11AM. The plan was to...well, I didn't really have a plan, but didn't have any more meetings scheduled, so it was ok to not have one for the day. My general idea was to maybe rent a car at the airport then head outside the city to visit the grand old man of my industry. But that was provisional; the train kept moving one stop closer to the Silver Line, not to a decision.

There was plenty to stew on while staring vapidly at advertisments in the subway car. Half the ads canvassed for clinical study volunteers ("Do You Have Memories of Childhood? Are You Right-Handed and Between the Age of 18 and 25?"), the other half offered some sort of health solution. One placard intended to ensnare MIT students into contract programming, I noticed it just as we rumbled underneath that institution, but all the others reflected the primacy of Hah-vad as the epicenter of the medical universe. Which, for me, was appropriate enough. The day before, I'd rounded up two of the smartest companies in my field (one of which invented and built the Internet) and put them in front of the most eminent group of epidemiologists on the planet. We attempted to solve an incredibly challenging technical problem in 45 minutes, and probably got even less time in which to do it than that.

Later that afternoon I met a good old friend and spiritual refugee, Eddy, whom I'd not seen for 20 years and who lives near Boston with his family. His dear wife H.G. had tracked me down two years ago, just after moving away from Boston, and this was the first time I'd gone back there directly. Interestingly, we were both graciously invited to go to a Boston Bruins hockey game. It was very enjoyable, in the way watching rival teams of Zulus engage in ritual combat while on stilts might be enjoyable, but it ended badly, with the enraged crowd getting violent and throwing everything they could get their hands on out onto the ice...Starbucks cups, bottles of water, ice cubes, half-eaten hot dogs, and even, incredibly, at least two glasses of beer. I've never witnessed such a sacrificial expression of disapproval. We went out after the game and started to catch up on a couple of decades, talking with each other like natives in the tongue of a dispersed illiterate tribe, speaking both to preserve and try to make sense of a new land. This is how it is with ex-Mormons, who share a code which is merely secret, and not sacred.

The subway pulled away from under the intense intellectual gravity field of MIT, climbed up its tunnel and broke out into a beautiful late Fall day, crisp and bright as one ever could be to prettify the tracks and greater Boston, the trestle suspending us delightfully over the River Charles. As it happened, I was drawing near and heading directly towards the place my mother claims I was born, Massachusetts General Hospital. (Admittedly the birth certificate, if I could find it, backs my mom up on this point.) We made it across to Charles Station, stopped to let the passengers off, and before the doors closed some kind of salmon-brain urge made me pick up my luggage and get out. As surely when I was born forty-some years ago, and just as I've ever seen it since, the Charles Station is a mess of raw two-by-fours, planks, sheets of plywood, rebar, and corrugated sheets of steel and plastic flapping in the wind, with puzzled looking men and women dressed in orange vests, rubbing their jaws in contemplation and occasionally picking up a ruler. In Boston, this near-perpetual state of being is called "renovation." For once, it made me smile.

I stood on the station platform and attempted to have a conversation with my partner in business and crime while looking in the direction of my being's entrance into the world, well obscured by what has now become a massive complex of medical buildings employing thousands of professionals. Mass and General it truly has become. Whimsically, right on the river in front of the hospital, there stands a granite jail which ran until 1990, the Charles Street Jail, one of the oldest continually functioning prisons in the world. Actually it was ordered closed by a District Court in 1973 for violating the Constitutional rights of the prisoners there, something about the conditions being cruel and unusual, but it kept running anyway for another 27 years. The amazing impostor Frank Abagnale, who Leonardo DiCaprio played in the movie Catch Me If You Can, once escaped from it in the late 1960s. At some point it began to dawn on me that men in hard hats were swarming over it, and the granite had been cleaned. "What now?," I thought with the jaundiced views of a Big Dig victim, but made a mental note to look it up as I dragged my luggage away to find a place quiet enough to talk on a phone. I headed for John Kerry's brownstone on Beacon Hill, figuring there was nothing happening there. (It was nice and quiet, and my "Hey, Senator Dipshit!" sign provoked no noticeable reaction.) Then I went over to the Ritz-Carlton to have three conference calls by the fireplace in the bar, judging which way to tackle Harvard's brave bull of a challenge.

I looked the Charles Street Jail up after getting home this morning, and it turns out a Seattle developer is turning the old gaol it into something quite different. He's calling it the Liberty Hotel.
Posted by MarcLord at 8:57 AM