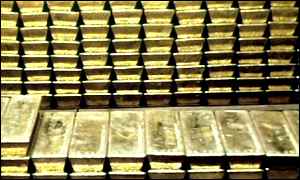 Bush Family Social Security Plan
I alluded to the Bush family Paraguay Connection a couple days ago. It was rumored that they sent one of their daughters down to Paraguay to finalize a 100,000-acre land deal, and early this week people started going on record, in English, about the rumors. It's been all over the South American presses for the past week. The ranch would be in a land trust in Chaco, and sit smack on the middle of one of the world's largest underground acquifers.

The Washington Post doesn't do a convincing job of saying that First Daughter Jenna really was in lower South America fulfilling her dream to teach with UNICEF for 10 days. (Interestingly, the Post has taken its story down for the moment.) She met with US Ambassador James Cason, and then and spent an evening at President Duarte's estate. Cason's resume reads like a tour of US secret wars in Central and South America.

The property the family purportedly bought is a few miles away from a US military airbase, Mariscal Estigarribia. 500 US special forces arrived there in 2005 for joint military exercises which involved passing out medical supplies to needy campesinos with heavily armed helicopters. Operation Commando Force 6. It never left, and then more troops are said to have followed. But despite the fact it can handle B-52 bomber staging and Galaxy C-5 Cargo planes, it's really not a US military base, according to a us.info.state.gov entry labeled "identifying misinformation." Allow me to misinform you more fully:

Rumsfeld's visit to Paraguay was preceded by rumors that he would push Duarte to allow the U.S. to have a permanent military base in the country for the purpose of "monitoring" Mercosur. After his talks with Rumsfeld, Duarte made it clear that "no world power is going to install any military base in Paraguay." He added that "Latin America has to integrate, form a power bloc without any kind of prejudices or exclusionary visions." Having shown his resistance to isolating Caracas, Duarte concluded by posing a counter-agenda to Washington's, calling on the U.S. to expand its markets for Paraguay's organic sugar, deregulate its markets for meat, and lower its tariffs on garments.

In Asuncion's view, Washington is welcome to keep helping Paraguay modernize its military, but deeper ties will have to be paid for with economic concessions.

Since I don't think this story will make front page news soon, let's ask ourselves the question: why would the Bush family be buying a county in Paraguay? My first intuition was a nasty one: nuclear fallout from a real war will tend to stay in the Northern Hemisphere, and Dubya, while fully prepared for the Rapture, is hedging the saved by Jesus bets on behalf of his less righteous daughters.

A more hopeful interpretation is spreading around the web right now, that it's an escape route in another sense. Paraguay has long been a haven for ex-Nazis. Dr. Mengele (the infamous "Angel of Death") went there, for example, after WWII and Paraguay's dictator, Alfredo Stroessner, refused to extradite him. Martin Bormann was long (incorrectly) rumored to have fled there. Juan Peron planned to go there to avoid prosecution. And their Senate voted last year to grant U.S. troops immunity from national and International Criminal Court (ICC) jurisdiction. (see "identifying misinformation" link above). Or maybe land is just a good deal and the Bushes know a buy when they see it.