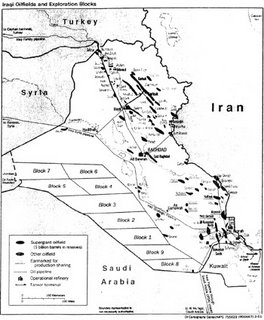 Hello Darkness My Old Friend, Pt. III
Here's a third installment to my continuing series on the Cheney/Rumsfeld cabal. TomS sent me an Asia Times article, "The Emerging Russian Giant, Pt. I" this morning; hat tip to you, Tom, and damn if the A-Times hasn't been burning up the charts lately with dynamite journalism. They must be included in the Real Stream Media Top 10 list.

The article's capable author, F. William Engdhahl vivisects Cheney with a cauterized scapel and it's obvious he has done deep, deep anatomy homework. He writes an exceptionally clear analysis of Russia's responses to Washington's efforts to loot, dismember, encircle, and enslave it after the Wall fell. Bottom line, Russia has been through very hard times but has maneuvered itself into a surprisingly strong position, has joined into a naturally symbiotic security arrangement with China, and much of this improvement was enabled by the past two years of increasing oil and gas price. Russia is starting to flex soft power muscles now, and its hard power military is probably (I thumbnail guess) more capable on a relative basis vs. the West than at any time since the mid-1970s...but in a way which relies more on qualitative superiority and flexibility than did the mass thrust doctrines of the Warsaw Pact days.

At the above left, you'll see the map which Cheney showed to oil, gas, and electricity men (including Enron's Ken Lay) in March, 2001. He touted the "blocks" on the West side of Iraq as virgin, unexplored territory chock full of oil and gas. They probably then divvied up those blocks based upon the dictates of Mr. Quid, Mr. Pro, and Mr. Quo, and nothing has so far abrogated whatever secret deals were made. The map is part of 7 pages of documents turned over by the Commerce Department under a March, 2002 court order handed down from Judicial Watch's Freedom of Information Act lawsuit against Cheney's Energy Task Force. Cheney was able to keep these seven docs in the dark until March of this year, and the proceedings are still secret. Using the charts, it's not too hard to connect the dots if you accept Robert's Rules of Order and combine them with human nature. In addition to maps of Iraq''s oilfields, pipelines, terminals and refineries, the documents include a list of "foreign suitors" for Iraq's oil. The game was how to keep foreign suitors out of a purported treasure trove. This meant walling off Russia militarily, and keeping China's nouveau riche suitors black-balled in the MidEast oil majors club.

Here is Engdahl's Cheney dissection, and in his boil-down we begin to glean how reality-based historians will approach the subject of the Bush Administration's ill-chosen moves:

...disregard for its allies as well as its foes. That reckless policy has been
associated with former Halliburton chief executive officer and now vice
president, Dick Cheney, more than any other figure in Washington.

The "Cheney presidency", which is what historians will no doubt dub the
George W Bush years, has been based on a clear strategy. It has often been
misunderstood by critics who had overly focussed on its most visible
component, namely, Iraq, the Middle East and the strident war-hawks around
the vice president and his old crony, Defense Secretary Donald Rumsfeld.

The "Cheney strategy" has been a US foreign policy based on securing direct
global energy control, control by the Big Four US or US-tied private oil
giants - ChevronTexaco or ExxonMobil, BP or Royal Dutch Shell. Above all, it
has aimed at control of all the world's major oil regions, along with the
major natural gas fields. That control has moved in tandem with a growing
bid by the US for total military primacy over the one potential threat to
its global ambitions - Russia. Cheney is perhaps the ideal person to weave
the US military and energy policies together into a coherent strategy of
dominance. During the early 1990s under father Bush, Cheney was also
secretary of defense.

If you read the article, the picture is as clear as anything Albrecht Duerer ever painted.