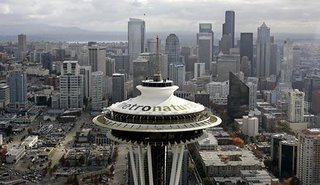 It's, Like, Metro...But Natural. Get It?
Nebulous weather, traffic congestion as fun-filled as a bout of irritable bowel syndrome, 34 different types of weezing nether-precipitation between momentary sunbreaks, and the most resolutely annoying drivers in North America weren't enough to keep people away. Drastic measures were needed.

On Friday, the City of Seattle unveiled an absolutely brilliant plan to keep people from migrating to it, one which will also be effective in cutting down on the number of unwanted visitors. It's called the "metronatural" campaign, and it is the city's new slogan. It's perfect. The last slogan, "SayWA" (can you "say WA?") was an abject failure in forestalling an overwhelming increase in terrible tourists, transients, and refugees looking to mooch off the Puget Sound's goodness while stealing land and parking spaces and hassling our spiritually enlightened inhabitants. As you can imagine, the search for a more noxious prophylactic to kick off an aggressive ad campaign was understandably urgent. It was time for a change.

"Come Visit Puke City" was a strong early entrant, but the anarcho-commissariat rejected it as too obvious and because it might attract out-of-town pukers, who are only allowed in specially designated areas. "The Other Shanghai" would've worked beautifully against the rest of America, but some Asians pointed out it would have an undesireable effect on their relatives. "The Respiratory Mold Capital of America," while perfectly accurate, was too technical. My personal favorite was "Lawyer Up, You Tourist Fucks" but the committee felt it overtly hostile and lacking in stealth. "Lichen Up Your Selves" was too upbeat. Surprisingly, my own inelegant throw-away submission, "Die, Eco-Nazis, Die!" made it into the semi-finals, but eco-nazis had infiltrated the panel. They tore off their $200 flannel shirts and stomped on them in rage, so there was little point in further debate.

The winning entrant had the inside track from the start. The city had wisely paid $200,000 to two homeless lesbians in Belltown (known by their street names, Mistress Shank and the Blob, doing business as 'Exclaim') to figure out what single word or phrase would repel the most people while still seeming to invite. "No problem," they said. "We personally repel everyone we meet on a daily basis. Fork over the money, you oppressive breeder, and you'll have your ad campaign."

Thus was born the metronatural ad campaign. 18-foot high letters spelling it out on the top of the Space Needle were unfurled to an incredulous world with all the confidence commensurate with previously unscaled heights of culture-jamming genius. I bow to the marketing acuity and bask in my metronaturality, savoring how the word stumbles off the tongue like a fumbling, embarrassed, failed bi-curious experiment gone horribly, gloriously wrong. Metronatural can be defined as the state achieved when failing to spot a transvestite in a strip club, and he/she/it sits on your lap and makes out with you for five whole minutes. Now that's metro-natural. Visit Seattle, and enjoy!
Posted by MarcLord at 8:01 PM