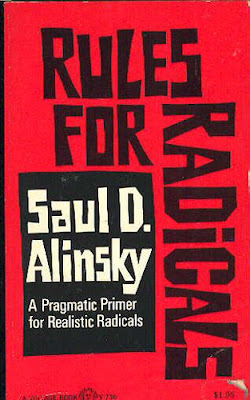 The organizer must become schizoid, politically, in order not to slip into becoming a true believer. Before men can act an issue must become polarized. Men will act when they become convinced that their cause is 100 percent on the side of the angels and that the opposition are 100 percent on the side of the devil. He knows that there can be no action until issues are polarized to this degree. I have already discussed an example in the Declaration of Independence--the Bill of Particulars that conspicuously omitted all the advantages the colonies had gained from the British and cited only the disadvantages.

What I am saying is that the organizer must be able to split himself into two parts--one part in the arena of action where he polarizes the issue to 100 to nothing, and helps to lead his forces into conflict, while the other part knows that when the time comes for negotiations that it really is only a 10 percent difference--and yet both parts have to live comfortably with each other. Only a well-organized person can split and stay together. But this is what the organizer must do.

Saul Alinsky (1909-1972) is known as the father of community organizing in the United States.
Posted by MarcLord at 10:00 PM

Alright, Saul, you nailed me. But I'm not much of an organizer.

From Barack Obama's Unlikely Political Education. In The New Republic, 03.19.07

Not long after Obama arrived, he sat down for a cup of coffee in Hyde Park with a fellow organizer named Mike Kruglik. Obama's work focused on helping poor blacks on Chicago's South Side fight the city for things like job banks and asbestos removal. His teachers were schooled in a style of organizing devised by Saul Alinsky, the radical University of Chicagotrained social scientist. At the heart of the Alinsky method is the concept of "agitation"--making someone angry enough about the rotten state of his life that he agrees to take action to change it; or, as Alinsky himself described the job, to "rub raw the sores of discontent."

On this particular evening, Kruglik was debriefing Obama about his work when a panhandler approached. Instead of ignoring the man, Obama confronted him. "Now, young man, is that really what you want be about?" Obama demanded. "I mean, come on, don't you want to be better than that? Let's get yourself together."

Kruglik remembers this episode as an example of why, in ten years of training organizers, Obama was the best student he ever had. He was a natural, the undisputed master of agitation, who could engage a room full of recruiting targets in a rapid-fire Socratic dialogue, nudging them to admit that they were not living up to their own standards. As with the panhandler, he could be aggressive and confrontational. With probing, sometimes personal questions, he would pinpoint the source of pain in their lives, tearing down their egos just enough before dangling a carrot of hope that they could make things better.

More than 20 years later, Obama presents himself as a post-partisan consensus builder, not a rabble-rouser, and certainly not a disciple of Alinsky, who disdained electoral politics and titled his organizing manifesto Rules for Radicals. On the stump, Obama makes a pitch for "common-sense, practical, nonideological solutions." And, although he's anchored to a center-left worldview, he gives the impression of being above the ideological fray--a fresh face who is a generation removed from the polarizing turmoil of the 1960s. The mirror he holds up is invariably flattering--reflecting back a tolerant, forward-looking electorate ready to unite around his consensus-minded brand of politics. Indeed, if there has been a knock on Obama's campaign in these early days, it's that it may be a bit too idealistic for the realities of a presidential race. With his lofty rhetoric and careful positioning as above politics, Obama in some ways recalls Bill Bradley, another candidate of moral purity--and one whose unwillingness to engage in the rough-and-tumble of modern politics ultimately proved his undoing.

Yet Obama connects his past as a Chicago organizer to his presidential bid with surprising ease. Last month, during his first visit to South Carolina since his campaign announcement, we discussed his community-organizing days. He sat at the head of a long table inside a dimly lit hotel conference room in Columbia and ate a chocolate energy bar. When I began to suggest links between his organizing work then and his current campaign, he interrupted: "I think there is. I don't think you need to strain for it." He was at home talking Alinskian jargon about "agitation," which he defined as "challenging people to scrape away habit," and he fondly recalled organizing workshops where he learned the concept of "being predisposed to other people's power."

Good morning, Bruce! Always nice to have a Springsteen in the house!

And thank you, Lord Wife.