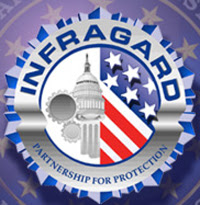 I'm Glad This Exists, Because I Have Nothing To Hide!

The FBI Deputizes Coroporations, via the Progressive:

Today, more than 23,000 representatives of private industry are working quietly with the FBI and the Department of Homeland Security. The members of this rapidly growing group, called InfraGard, receive secret warnings of terrorist threats before the public does—and, at least on one occasion, before elected officials. In return, they provide information to the government, which alarms the ACLU. But there may be more to it than that. One business executive, who showed me his InfraGard card, told me they have permission to “shoot to kill” in the event of martial law.
InfraGard is “a child of the FBI,” says Michael Hershman, the chairman of the advisory board of the InfraGard National Members Alliance and CEO of the Fairfax Group, an international consulting firm.

InfraGard started in Cleveland back in 1996, when the private sector there cooperated with the FBI to investigate cyber threats.

“Then the FBI cloned it,” says Phyllis Schneck, chairman of the board of directors of the InfraGard National Members Alliance, and the prime mover behind the growth of InfraGard over the last several years.

InfraGard itself is still an FBI operation, with FBI agents in each state overseeing the local InfraGard chapters. (There are now eighty-six of them.) The alliance is a nonprofit organization of private sector InfraGard members.

“We are the owners, operators, and experts of our critical infrastructure, from the CEO of a large company in agriculture or high finance to the guy who turns the valve at the water utility,” says Schneck, who by day is the vice president of research integration at Secure Computing.

“At its most basic level, InfraGard is a partnership between the Federal Bureau of Investigation and the private sector,” the InfraGard website states. “InfraGard chapters are geographically linked with FBI Field Office territories.”

In November 2001, InfraGard had around 1,700 members. As of late January, InfraGard had 23,682 members, according to its website, www.infragard.net, which adds that “350 of our nation’s Fortune 500 have a representative in InfraGard.”

To join, each person must be sponsored by “an existing InfraGard member, chapter, or partner organization.” The FBI then vets the applicant. On the application form, prospective members are asked which aspect of the critical infrastructure their organization deals with. These include: agriculture, banking and finance, the chemical industry, defense, energy, food, information and telecommunications, law enforcement, public health, and transportation.

FBI Director Robert Mueller addressed an InfraGard convention on August 9, 2005. At that time, the group had less than half as many members as it does today. “To date, there are more than 11,000 members of InfraGard,” he said. “From our perspective that amounts to 11,000 contacts . . . and 11,000 partners in our mission to protect America.” He added a little later, “Those of you in the private sector are the first line of defense.”

He urged InfraGard members to contact the FBI if they “note suspicious activity or an unusual event.” And he said they could sic the FBI on “disgruntled employees who will use knowledge gained on the job against their employers.”

In an interview with InfraGard after the conference, which is featured prominently on the InfraGard members’ website, Mueller says: “It’s a great program.”

The ACLU is not so sanguine.

“There is evidence that InfraGard may be closer to a corporate TIPS program, turning private-sector corporations—some of which may be in a position to observe the activities of millions of individual customers—into surrogate eyes and ears for the FBI,” the ACLU warned in its August 2004 report The Surveillance-Industrial Complex: How the American Government Is Conscripting Businesses and Individuals in the Construction of a Surveillance Society.

Labels: Homeland, One Nation Under Surveillance

I don't think you need to have secrets to get in trouble. Here is an account of one poor sucker.