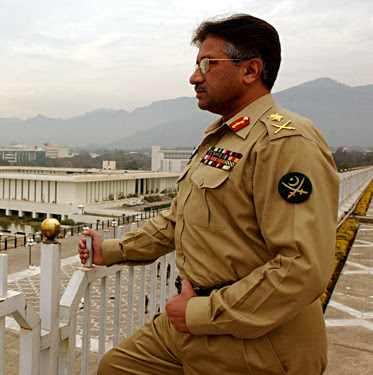 Pakistan's Dictator Urges Acceptance Of Election Results
Musharraf's party (the PML, or Pakistan Muslim League) took a beating at the polls today, and both the results and his response may serve to loosen the lid on Pakistan's pressure cooker. It appears he's going to peacefully hand over power, a decidedly rare event for a dictator. The Pakistan People's Party (PPP) appears set to take a majority in the National Assembly, making this a martyr's victory for the slain Benazir Bhutto. Despite fears of terrorist attacks at the polls, there was no major violence, and turnout was 42 percent. via Sify News:

"Instead of crying foul, we should all show magnanimity," he said during a programme on state-run TV. All parties "must accept the results gracefully", he said.

In the face of challenges like extremism and terrorism confronting the country, it is important for Pakistan to stand united and exhibit reconciliation instead of confrontation.

"The election is the voice of the nation and we all, including myself, should accept these results," he said, adding there is a need for political reconciliation to ensure a secure and stable democracy in the country.

He lauded the law enforcement agencies, Election Commission and other authorities for providing effective security to ensure that the elections were free, fair, transparent and peaceful.

It's nice to hear some positive news from Pakistan. But I worry when I read news about the severe restrictions women there face:
http://www.msnbc.msn.com/id/23224831/

Discrimination against women is not limited to Pakistan, or Middle Eastern countries in general. Saudia Arabia doesn't allow women to drive cars. In Japan, women face severe workplace discrimination. There was a huge outcry when South Africa practiced apartheid; where is the outrage when an ally discriminates against the 50% of its population that lacks a Y chromosome?

Well, maybe then he was NOT a dictator after all!

If the west could understand that the EASTERN humans "NEED" a father figure, "SEEK" a fierce leader, "DEPEND" on a substitute for "god" on earth, then they wouldn't call these so called dictators DICTATOR.

I am not optimist about this power sharing, but let's wait and see what history says.

not tons of optimism here, either, but it's impressive and encouraging that the elections went off well. Given that dictators don't allow real elections, perhaps we can call Musharraf an ex-dictator.