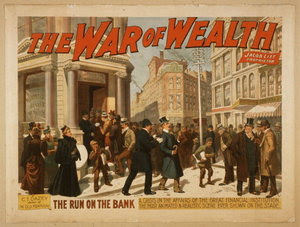 Biggest Bank Blocks Hedge Fund Withdrawals
Pretty significant development. There was a run on a couple of Citigroup hedge funds, and they closed the teller windows. Via CNBC:

Citigroup has barred investors in one of its hedge funds from withdrawing their money, and a new leveraged fund lost 52 percent in its first three months, the Wall Street Journal reported Friday.

The largest U.S. bank suspended redemptions in CSO Partners, a fund specializing in corporate debt, after investors tried to pull more than 30 percent of its roughly $500 million of assets, the newspaper said. Citigroup injected $100 million to stabilize the fund, which lost 10.9 percent last year, the newspaper said.

The fund's manager, John Pickett, left following a dispute with Citigroup executives and complaints from investors after he tried to back out from committing more than half the fund's assets to buy leveraged loans tied to a German media company, the newspaper said. That matter was settled when CSO agreed to buy $746 million of the loans at face value, though they were trading at 86 percent to 93 percent of face value, it said.

Meanwhile, Falcon Plus Strategies, launched Sept. 30, lost 52 percent in the fourth quarter, after betting on mortgage-backed and preferred securities and making trades based on the relative values of municipal bonds and U.S. Treasuries. Some collateralized debt obligations in the fund trade at 25 percent of their original worth, the newspaper said.

Both funds are run in Citigroup's alternative investments unit. That unit was briefly headed last year by Vikram Pandit, who in December replaced Charles Prince as Citigroup's chief executive. Old Lane Partners, a hedge fund that Pandit founded and sold to Citigroup last year, has also had weak performance, falling 1.8 percent in January, the newspaper said.

Since June, Citigroup has disclosed some $30 billion of write-downs and losses tied to subprime mortgages, complex debt and deteriorating credit. The problems contributed to a record 9.83 billion fourth-quarter loss. Profit that quarter in the alternative investments unit fell 89 percent to $61 million.

Citigroup was not immediately available for comment. A spokesman told the newspaper that CSO and similar hedge funds are subject to comprehensive risk oversight, and that Falcon Plus's returns suffered from volatile fixed-income markets.