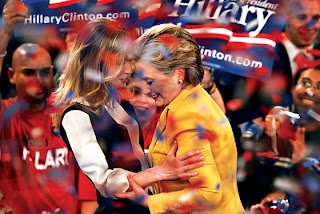 President Chelsea Clinton
Yep, it's finally happened. New York Magazine poses the question, "Is Chelsea the Clinton Dynasty's backup plan?" The chattering class is looking down the road, feeding my gluttonous appetite for satire, helping me imagine a future that just keeps passing the Presidency back and forth. A two-family system! Time to roll out 2007's Blog Comment of the Year, by Jon:

The Ministry of Truth today announced that a review of intelligence from 2003 reveals that then-Vice President Cheney's office falsified intelligence that was used to justify the occupation of Iraq.

President Chelsea Clinton had no comment, although her opponent in her re-election campaign, Sen. Jenna Bush (R-Anbar), used the opportunity to bash the President for not responding more forcefully to the imminent threat posed by Oceania.

"The other rivers add power to you,
Yakima, Snake, and the Klickitat too,
Canadian northwest to the ocean so blue, roll on, Columbia, roll on!"

I wouldn't depend on that long term.

If you mean the power being sold to the highest bidders on a nationalized grid, you're probably right. If you mean that dam silting up, it should be good for another 80 years or so. (We should live so long!)

Meantime, the power here still costs only @30-40% of the national average, and that's with the Columbia River Authority selling half of it down to California.

Even though Seattle isn't a very good solar collector, I would love to power my house with the sun. It could almost be done. Until there's some government incentives, though, the numbers just don't add up. Hydroelectric power's too cheap here, and the Columbia isn't even the only dam.

Look who's out to help Clinton:
" It may be sound unbelievable, but conservative Rush Limbaugh is urging Republicans to cross party lines this Tuesday in primaries in Ohio and Texas and vote for Hillary Clinton.

During his No. 1 rated radio show and on his Web site, www.rushlimbaugh.com, the former Clinton archenemy has told listeners to “pimp themselves” for just one day vote by voting for Hillary to keep the Democratic Party “at war with itself.”

Citing a story in a Texas newspaper headlined “Many Republicans to Vote for Obama," Limbaugh told listeners this week: “I understand I've got a big challenge here to try to get Republicans to change their minds on this and vote for Hillary to keep her in the race, to keep that party at war with itself . . .

“It's clear that Republicans in Texas have been listening to this program where we have advised Republicans to pimp themselves for a day and go vote in the Democrat primary . . . I just think, at this stage, the longer Hillary can stay in this, the better for us.”

Limbaugh said he wants to see Hillary and Barack Obama continue battling, noting that the battle will end if Hillary is vanquished and Obama can focus completely on presumptive GOP nominee John McCain.

“I know I'm fighting an uphill battle . . . vote for Hillary to keep this campaign going, this 'uncivil war,'” Rush said.

“If Hillary loses this thing, all of that's going to come to a screeching halt. We want all the disruption in that party as possible. It's about us winning.” "