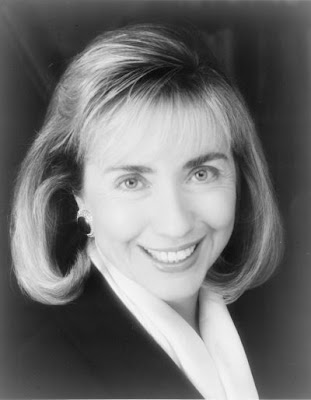 Peggy Noonan Gives Hillary Clinton The Key To Winning
It's not just tactics, it's something deeper. From last week's WSJ article:

As in: "Look, let's be frank. A lot of politics is spin, for reasons we can all write books about. I'm as guilty as anyone else. But right now I'm in the fight of my life, and right now I'm not winning. I'm up against an opponent who's classy and accomplished and who has captured the public imagination. I've had some trouble doing that. I'm not one of those people you think of when you hear a phrase like 'the romance of history.' But I think I bring some things to the table that I haven't quite managed to explain. I think I've got a case to be made that I haven't quite succeeded in making. And I'm going to ask you for one more try. Will you listen? And if I convince you, will you help me? Because I need your help."

Could Mrs. Clinton do something like this? I doubt it. She'd think it concedes too much and would look weak. But maybe it would show an emotional suppleness, and a characterological ability to see things as they are, which is always nice in a president.

I don't like Hillary, I really don't! But I don't want her ACT supple! She is not a supple woman and if she acts like one, I would really hate her.

If hillary WAS more feminine, by nature and culture, she would not be in such a tough position that she is now. But should she flip and wear the mask of Betty-Blues, no! that would be the SUICIDE of her life.

I personally do not like populists. Especially those who pretend to humility. I also hate America's tendency to reject people who are not "beerable", i.e. inspiring to have a drink with! What the hell!
I don't want a president to drink with. I want a president who has read and written books.

I feel bad for Hillary, also because she is old. This world is unkind to old people; especially old girls! There is much truth to the misogyny of our culture. But I think, if Hillary was not a man in a skirt, if she was a real woman, she would have had a better chance!

You know how I can get my girlfriends to accommodate me at work? I act vulnerable, neurotic, weak, and needy! But as I must play in the boys field, more often than not, I CANNOT let my iron face drop on them. This is hllary's problem: his playmates have been boys, for half a century. And that is in itself remarkable!

At the end, we can thank the 70s feminists for warping our ideas of womanhood, in the name of liberation! Yes I am free ... but chained by me!

"At the end, we can thank the 70s feminists for warping our ideas of womanhood, in the name of liberation! Yes I am free ... but chained by me!"

Thank you for that and other observations, and it seems Hillary has the same conundrum. Noonan is asking her, or taunting her, to become a different person. Which she cannot do.

I wonder if a female candidate like Angel Merkel could win here.

Old,eh? Well, when you reach your late fifties-early sixties, you may be surprised at how youthful you still FEEL, even if you don't look it.
And us "old" 70's feminists did a lot of work so you can have the luxury of feeling chained, poster #1.
But it is true that Hillary Clinton can't win for losing, with regards to competing with the good old boys.
Interesting fact: Black men got the vote before women did in the USA. Of course white men did all they could to keep men of color from voting, but it is certainly another picture of mysogyny.
What happened when Hillary was filmed "weeping" - which she actually didin't do, she appeared to be kind of tired and disappointed - marclord? All of team GOP and others pounced on her and called her both a crybaby and a faker. It might have been a truly genuine moment, and she was pilloried. You want her to do more of that?
At our house, my beloved spouse thinks she has blown it by not fighting harder. Even progressive men damn her for whatever she does.
Fine. You can have Obama, who evidently likes to stage fainting girls in the front row for him to rescue. This whole election lead-up is becoming a worsening spectacle, and we will be stuck with some crazy-ass REALLY OLD white man after teh November elction, I'll bet.

Huh. Not reading much GOP frippery, I was only dimly aware she was called a faker, but she does get a bum rap from lots of dumb people. As for the 'weeping, many have made the case that while showing some emotion may have been pilloried by pundits, it helped her get more votes. I don't want her to cry or act more womanly, but a stiff-upper-lip approach has not been effective for her so far.

No argument here that she gets irrationally taken to task by the petty press on impossible standards which are schizophrenic to be kind, mean-spirited to be not. If it were Hillary Rodham running, she'd have a much better shot. Really. As it is, if she wins the nomination, it will enliven those ROWM (really old white men) to a shocking degree, about when it occurs to their doddering brains that Bill Clinton will be sleeping in the White House again.

She may yet win. Her campaign is climbing into the mud-wrestling ring as I write, and the Clintons are highly skilled, determined politicians. They aren't going quietly, if at all. The main reason we don't support Her is because we learned too much about Them.

So, what I understand from all this is: Noonan wants Hillary to tell even more egregious lies.

I'm sorry, Marc, but Hillary is a vile, nefarious, black-hearted, lieing, venal, Neo-con. It has nothing to do with mysogyny, it has everything to do with her character.

It is still possible to see some goodness in her, but I share your distaste. These two are bad, bad news. And the more you know about them, the worse it gets.