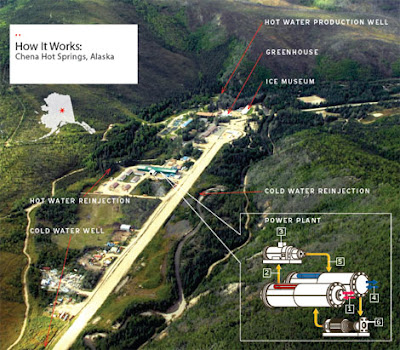 The whine of the power plant sounds like a jet engine as refrigerant blasts through the turbine at 1000 mph. Though the equipment is compact, the din fills the vast hangar, and mechanical engineer Gwen Holdmann has to shout to be heard: “What you see here is very Alaskan. It’s not painted. It’s not pretty. But it’s real.” I place my hand on the steel door capping the plant’s evaporator; it’s warm to the touch, filled with Alaska’s most promising new energy source—plain water.

It’s midnight at Chena Hot Springs Resort, 56 miles northeast of Fairbanks, and outside, the July sun has only just slipped below the horizon. Holdmann’s blond hair escapes a loose ponytail as she climbs onto a metal walkway to point out the heat exchanger. A black-eared husky named Amberlynn watches her every move from below. “The cool thing about this ... ,” she begins, as she does most sentences, and it occurs to me that it’s appropriate every time: This is cool. It is Alaska’s first geothermal plant, and it’s producing electricity from lower temperature water than any plant in the world.

Heat stored beneath the Earth’s surface holds 50,000 times the energy of all the oil and gas in the worl combined. If it could be harnessed, it would be an ideal source of base-load power: Geothermal is cleaner than fossil fuels, and more reliable than alternative sources like tidal, wind, wave and solar. Today, geothermal plants in the United States generate nearly 3000 megawatts of electricity—enough to power South Dakota. Almost all of it comes from reservoirs that are at least 300 F.

The water rising through a fracture in the granite pluton under Chena is only 165 F. Experts didn’t think it was hot enough to produce serious power. But with the nearest electrical grid 32 miles away and generators burning through $1000 worth of diesel fuel daily, Chena had the incentive to prove the experts wrong. Now, its tepid water not only generates electricity, it heats the resort’s buildings, maintains a greenhouse and keeps an ice museum frozen year-round. There are thousands of such low- to moderate-temperature geothermal systems scattered throughout Alaska and the rest of the country. Power plants like the one at Chena could tap them to produce tens of thousands of megawatts of electricity.

“I think we have an opportunity here in Alaska to be leaders in moving toward a more renewable energy economy,” Holdmann says, her voice an equal mix of practical and impassioned. “The cost of power can be exorbitant in our villages—as high as a dollar a kilowatt-hour. It’s a real bummer for a lot of these communities, but it can also be a real motivating factor.” She pauses at the door of the hangar. “We’re an oil-producing state and we’re worried about our energy costs. It’s just a matter of time before the rest of the country catches up to where we are.”

Chena Hot Springs is the kind of resort one would expect to find on an episode of Northern Exposure. Nestled deep in a valley of birch and aspen, it has a comfortable, well-appointed lodge, an activities center, indoor plumbing and a resident masseuse. It also has a team of sled dogs, a 3500-ft. dirt runway, outhouses and, at this moment, a moose nonchalantly grazing near a geothermal production well.

Holdmann is well-cast for the setting. A professional dog musher, she lives off the grid with her husband and 80 huskies and commutes to work in a Jeep Liberty that runs on vegetable oil. She came to Chena four years ago as a hydropower consultant, but quickly determined that the water flowing under the resort was more valuable than the water flowing past it.

The only hitch: “Some of the reports I read from research on Chena concluded there was no way you could ever generate power out of this resource,” Holdmann says. “I started to look into why, and began to realize it was a bit of a misconception.”

When water cooler than 350 F is released from the pressure of a geothermal reservoir, it doesn’t convert to steam efficiently enough to drive a turbine directly. Anything less than 230 F was considered too marginal for the alternative: a binary system that uses water to heat a fluid with a lower boiling point. But that threshold was a product of geography, not technical feasibility, Holdmann realized. A binary system just requires a heat source and sink: 165 F water can produce electricity if the ambient air or surface water temperature is at least 100 degrees lower. While that may be tough to find in the deserts of Nevada, in Alaska cold air and water are abundant resources.

Now all she needed was a plant, built to one important spec: “We need things that work up here,” Holdmann says. “We don’t need a bunch of things that, yeah, you can do in a lab. We need something we can take to a village and use normal people to run it. And run it every day, because we don’t need it only half the time.”

Fortunately, United Technologies Corp. was looking for a partner to collaborate on a pilot project: an air-conditioning unit that had been reverse-engineered to run off geothermal water. Instead of putting in electric power to create areas of high and low temperature, Chena provides the heat differential and the plant puts out electric power.

The technology has the added benefit of solving two remaining hurdles to low-temperature power generation. First, air-conditioning refrigerant operates more efficiently at low temperatures than isopentane and other fluids typically used in power plants. Second, the components are already mass produced, which cuts the cost of a small, modular plant in half.

Chena’s two 200-kilowatt modules provide more than enough power for the entire resort and have reduced the cost of electricity from 30 cents a kwh to only 5 cents. With a capital cost of $2.2 million, including exploration and drilling, the project is expected to pay for itself in four to five years.
Posted by MarcLord at 12:30 PM

Wow.......Wonder how long it will take Big Oil to sabotage that kind of thing.

If it's not patented, and it doesn't appear to be, it will be a lot more difficult for them to block it. It would come down to taking control of the entire energy grid, in order to invalidate the power generated. But as I understand it, the same process can be employed at every wastewater treatment facility in North America, taking advantage of temperature disparity, and if that's the case, Big Oil would be up against municipalities.

Finally, the return on investment is on the order of 4 years, very rapid, and the implementation is much less capital intensive than nuclear, oil, or coal, with minimal externality costs. So this geothermal approach looks extremely promising, and hard to block.