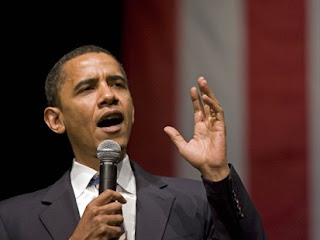 Obama Takes Up Leadership On Iraq
By pressing to put "benchmarks" down into legislation and by scrapping the "timetable for withdrawal" demand. The Bushies do not negotiate, as Obama realizes, and as long as breath is left in the blow-hard lungs of a few crucial bodies, they will never admit to withdrawal. They may start to withdraw, but they won't admit to it because it'd tattoo them with the "loser" label. Meantime, what they will do is agree to benchmarks, because if you're a Bushite, benchmarks are a way to buy some time, have no immediate cost, and may get Congress off your sore butt for a couple of weeks. (As the Bush Administration knows so well, "Denial" is too a river in Egypt! And they'll smash all you unpatriotic al-Qaeda-supportin' girle-men in the mouth if'n ya say sumpin' else.)

With the benchmark issue, Obama grabbed the mantle of leadership away from Hillary, which is coming right after beating her in individual donations by a 2:1 margin (100,000 contributors vs. 50,000), and probably taking the lead in current donations by a 25% or better margin. In taking this stand, he also seems to recognize the Council on Foreign Relations (CFR) is of multiple minds about Iraq, and about the ability to maintain a dollar-based "Sole Superpower" front. Benchmarks are an excellent wedge with which to separate the policy elites who still want to grip the Mid-east tightly from those who have come to the conclusion it's time to leave and invest our money into more productive activities. For the foreign policy dead-enders, separation means isolation. And those lightly granted benchmarks will come back to haunt BushCo like a nest of tarantulas, because we all know Iraq...ain't...coming...back.

While some of his erstwhile supporters are disturbed by Obama speaking to the Israel Lobby and making reassuring noises, and by his talk of making a larger, more "boots" oriented Army, these are the necessary and responsible steps to taking power, not to mention securing the lives of his family. I wish we didn't live in this kind of country, but we do, and Obama is being very smart. It doesn't mean he's going to revoke the things he's worked his adult life for, those being greater income equality, job creation, community activism, youth training, strong churches, and Constitutional law. It just means he knows what it takes to get there. As far as not leaving Israel to the wolves and about a larger Army devoted less to expensive gadgetry, these are solid positions. Strangely, I agree with them.

Back during his campaign, his staff called Clinton "Secretariat" for his thoroughbred abilities and winning ways. They knew if they just put him into the right settings, he'd run away from the competition. I'm not sure what nicknames Obama's staff may have for him, but "Muhammad Ali," after the greatest prize fighter of all time, may be one of them. He's awful hard to hit, and he hits awful hard. His stint on ABC News with George Twerpanopolous this morning was a showcase for a uniquely gifted leader. "Politics" is often fake, but its contests are real, and its masters are real. I would suggest a listen to what Obama had to say, and video of the interview in full is available at this link. Here's just one excerpt:

"What I don't do when I'm campaigning is to try to press a lot of hot buttons and use a lot of cheap applause buttons, because I want people to get a sense of how I think about this process," said Obama. "I think that one of the problems with political speeches is that we all know what folks want to hear. We know who the conventional, stereotypical enemies are on any given issue, and we have a tendency, I think, to play up to that. And I actually think that we're in this moment in history right now where honesty, admitting complexity is a good thing."

Sound to you like somebody who can lead this or any other country effectively? Sound like a man with a plan whom the times demand? This man just might be able to save our ass. Give him some money, because this old country is running out of time.
Posted by MarcLord at 10:40 AM