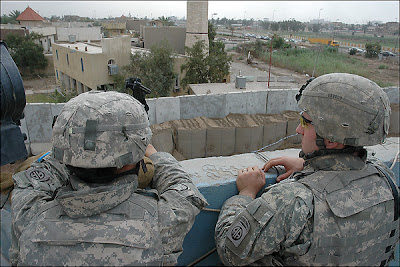 Fort Apaches On The Tigris
Since its announcement, I've been harping on the disastrous end the "Surge" will come to in Iraq. Its strategy hinges on creating secure gated communities, and is a close facsimilie of the more torture-driven, less firepower-dependent French/German "quadrillage" methods of counterinsurgency which served as models for our good General Petraeus.

Here comes the harp again. Hard as it is to believe, the Pentagon's execution of strategy in Iraq is getting worse. First, Petraeus and others now see "the Surge" extending into '08. Next, the whole logic underlying quadrillage as a "pacification network" has already failed, because the US is being forced to construct heavier blast shields and to up-gun garrisons in order to keep them alive. If pacification were making the desired headway, taking that step probably wouldn't be necessary. Garrisons are under frequent attack, even in Baghdad; one fort was breached recently by a truck bomb which reportedly killed 9 and seriously wounded 20 soldiers:

"There's two threats to the combat outpost . . . a huge truck bomb, and indirect fire," Lt. Gen. Raymond T. Odierno, who handles day-to-day military operations in Iraq, said in an interview at his Baghdad headquarters last week. In response, he said, U.S. troops are building more walls to shield themselves from mortars and rockets, while trying to track down insurgents firing on them.

To counter truck bombs, military engineers are gauging the structural soundness of the outposts and making sure they are well removed from traffic, Odierno said. Antitank weapons such as the bazooka-like AT-4 are also now required for soldiers on guard.

The Iraq Command is botching the fortification job itself and, disturbingly, is missing the greatest threat they face. A third threat: direct ground assault. Pat Lang over at Sic Semper Tyrannis points the finger of experience at General Odierno, noting that as forts go, they're generally improvisational, poorly located, and insecure; if the insurgents used truck bombs to breach a fort wall or gate, they could mount a ground assault and overwhelm the garrison. If they did this to a number of forts at once, it would be a nightmare.

Pat's point about breaching the garrison walls is true, and it's sad the general in question seems to have missed that possibility, but ground assaults may not even be needed to reach disaster status. The garrisons could simply be harrassed to death, for a number of reasons.

First, installing mini-garrisons into hostile neighborhoods with so few pacification carrots serves to negate the overwhelming advantage in firepower, and the considerable advantage in manoevre, factors our ground forces and tactics are designed around. Their fields of fire are reduced to the same as that of their enemies, a few hundred yards at best. It's M-16s vs. AK-47s all over again. Not good.

Second, putting professional, highly trained career soldiers into these forts as cannon fodder is nothing short of criminal. They're not even useful for "bait-and-destroy" missions, rather they encourage dispersion and steady forms of nuisance resistance. They are static targets waiting to either run out the clock, get wasted, get rescued, or get extracted. Or, as will be common, to go twitching mad. Can you imagine what it's like being stuck in one of these forts for months on end?

As an insurgent, all you'd have to do to generate wasteful responses from the garrisons and their rescue/reinforcement/air cover elements would be to get a few friends with light weapons, some surgical tubing, a dog food bowl, and catapult some molotov cocktails at it most every night. Or mortars. Or pot-shots. A recreational RPG. Or the occasional suicide bomber. The populace will back these nuisances up in the daytime with unfriendly stares, and anybody who in the gated community who lifts a finger to help the Americans would very quickly be taught not to.

By pressuring this style of occupation steadily, just heavily enough to keep forcing responses out of it, an adversary can provoke the whole logistical structure to grind itself to bits while it runs around trying to defend all the damned forts. An insurgency could win with comparatively little cost in casualties or equipment, knowing that the position of the garrisons are untenable.

The Iraqi insurgency need not scale up into squad or platoon-level concentrations to win by overwhelming specific garrisons in ground assaults. While losing forts like that would be a tremendously visible loss of prestige, the insurgency can also win by keeping its operations on the micro-logistical scale. By focusing on territorial coordination rather than direct ground assaults, they can overwhelm the support structure for the entire fort system. Possibly in the same amount of time. I would guess the probing, steadily escalating approach is what they'll stick with. If necessary, when the support system has tired and there's been plenty of time to probe, map, and measure weaknesses in response, then will come the breaches and the assaults.

Either way, the sheer asymmetry of expenditure by the two sides and results obtained for them eventually guarantees total US force exhaustion. And it's bigger than just Iraq. When you declare war on everybody, you've got to worry about everybody, and this is the role calling for a "Global War on Terror" has trapped our armed forces into. As for Surges, gated communities, quadrillage or GWOT, once we get kicked out of one fort, of one region, or one country, we've demonstrated our own defeat. Either some of those insecure forts must be abandoned, or they'll fall.
Posted by MarcLord at 1:04 PM