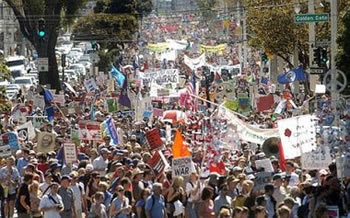 "Whom the Gods would destroy, they first make mad."
Euripides, via MacBeth, 2,447 years ago

"Cindy Sheehan is a clown. There is no real anti-war movement. No serious politician, with anything to do with anything, would show his face at an anti-war rally..."
Karl Rove, September 18th, 2005

Yet an estimated 200,000 to 300,000 antiwar protestors stormed the streets of D.C. on Saturday, September 24th, 2005. I was sad to not be in attendance. As country singer Steve Earle noted during a performance at the mall that day, "Not only is there an antiwar movement, the desire to pull out of Iraq is slowly becoming mainstream."

Publicly Traded Media did its best to downplay the numbers of protestors and its coverage of them in D.C. that day, like it wasn't news and the participants were Protesta Non Grata. We learned our lesson on the homefront in Vietnam, and all that. Well, actually, no.

There's the old form of protest of marching in the streets, but there are also 60 million bloggers in the world, the vast majority of which are strongly against Dumb Wars. Totally normal people like me, Bruce at the River Blog, Hope at Deep Confusion, Naj at IranFacts, and tens of millions of others voicing their disgust over what's happening . It's hard to know how many people read all those blogs, but one thing is sure: a lot more thought and discussion is going on in them than in Publicly Traded Media, and it's a very important form of protest. A self-organizing, evolving, momentum-building form of protest. So whether or not people are marching in the streets bearing signs, baring breasts, and burning effigies, which they have been doing by the millions across the world, the real battle for the media is going on over the Internet.

Earlier today, I linked to an ABC News page which contained the video of Barack Obama's interview with a scurrilous, tough-talking little turn-ass named George Twerpanopolous. The ABC News web page wouldn't allow me to outline text and press "Ctrl-C" to copy it, so I had to go dig it of the source html. Those pathetic bastards. They're trying to squelch bloggers, and they had a section on the page soliciting comments with the link title of "See What Others Are Saying." As of 12PM Pacific time, there were a grand total of three comments. As of 10PM Pacific time, there are a grand total of 20 comments. In the words of Chris Farley, "Well, whoop-dee-frickin' Doo!" In the blogsphere, there were probably millions of comments on Obama's interview today. Will Main Stream Media be able to co-opt the blogsphere and bring commenters into their arms, gaining their attention and trust? Anything's possible. Meanwhile, guess who's winning right now?

The Unreal Anti-War Movement has taped a big "Kick Me" sign on the back of Karl Rove's suit, and the kicks are starting to hurt. "Serious politicians" like Arlen Specter will be lining up for free kicks since someone in the White House sent Murray Waas the Un-Dead E-mails, i.e., the ones Karl stupidly thought he had permanently deleted; he's about to learn the meaning of that old country song, "Drop Kick Me Jesus Through the Goal Posts of Life."

There is a real anti-war movement in America. It's just moving in new ways people in the White House are Press Corps are too insulated and ignorant to understand.
Posted by MarcLord at 3:27 PM

Every thing I read on your blog gives me goosebumps Marc. You really get to the heart of the matter, an=d so eloquently. Thanks for the shout-out and thank you for staying so true and strong to the voice of sanity and compassion. You are a blogosphere hero and I'm proud to call you a friend.

Wow. Thanks, Hope! I'm really blown away because I think the same of you. You're a lot better with the activism thing, and you even got me to call
Nancy Pelosi's office--no other person has ever gotten me to actually contact a representative. So you're exceptional, and on that measure and many others you're a blog hero. I've got a full-time-plus job, so a lot of blog-things fall through the cracks of my life. Thank you for making my week. =) + ;-)

My pleasure. Praising you and your work is effortless. Thanks for the kudos it is high praise, indeed.

Also, don't forget, one voice to a public official represents in marketing terms, the voices of 10,000 who feel the same way but didn't take the time to call/write because they thought it futile.