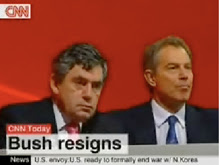 CNN Culture Jammers At It Again
The spirit of Ted Turner lives on in his CNN captioneers. 'Tis a headline devotly to be wished, but it was Tony Blair, poodle plenipotentiary, who resigned yesterday in his trademark manically earnest, halting cadence. I blew my prediction of how long Blair could last in office. I thought he'd be gone by last November, after parliament staged its coup in September. Close but no cigar. Instead, Blair copped a plea agreement which allowed him to stay in office until now in return for a decorously smooth hand-over to Gordon Brown. I listened to the BBC broadcast of his farewell speech, and here is my transcript:

"Some may deem. It a mistake! Afghanistan...and Iraq. The truth is. You can't go on. Forever! Ten years. Is long enough. To have led. This country. Although I'm sure. I could rule. Much longer!"

I half expected him to launch into a suicide-inducing version of "I Did It My Way." Blair's speaking style is gratingly similar to the one employed by the captain of the Starship Enterprise, James T. Kirk. I miss London very much, but not enough to have subjected myself to a daily diet of that over the last decade.

To paraphrase a Queen Mother, "Plug your ears, and think of England."
Posted by MarcLord at 10:39 PM