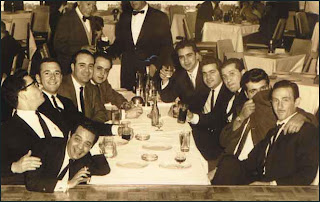 By The Way...JFK Assassination Solved Via Confession
And not just any confession. E. Howard Hunt's confession. Name ring a bell? He organized the Watergate break-in and later did three years in prison for it.

Hunt made his first son, Saint John Hunt, a cassette tape in 2004 and told him to play it after he died, and die he did on January 23rd of 2007. In accord with his father's wishes, his son got airplay on NPR last week. None of the major media or blogs have picked up this story. Why not? You tell me. I'd love to know. (Correction: There is a long story in the Rolling Stone's April issue. Along with lots of background and human interest angles, the article places Hunt dressed as a tramp at the Dealey Plaza the day of the assassination.)

Basically, Hunt said LBJ organized the assassination through the CIA, which JFK had managed to enrage in multiple ways. LBJ had much to gain, but others had motives of vengeance, patriotism, and pure hatred. Hunt says the scene was set up by Operation 40, some of whose members are pictured above in a nightclub on January 22nd, 1963 in Mexico City. This group was responsible for murder and mayhem all through South and Central America and the Caribbean on their mission against Communism. Hunt names Operation 40 agents Cord Meyer and David Atlee Phillips as planners, who in turn designated Frank Sturgis and David Sanchez Morales to carry out the operation. Cord Meyer was the CIA's Assistant Director of Special Plans, better known as the "dirty tricks department" and his beautiful, artistic, left-leaning wife was JFK's favorite mistress, possibly from before WWII until at least 1962. Her name was Mary Pinchot, and she had been criticized as a security risk during the 1950s McCarthy hearings.She was shot to death by an assailant in Washington, D.C. in 1964. All in all, it's a regular "motive, means, and opportunity" cornucopia.

These men have largely faded from modern memory, but they are part of the group JFK publicly denounced and left hanging in the wind after the disastrous Bay of Pigs regime-change invasion of Cuba. One of them, the man laughing at the camera, is David Sanchez Morales, an assassin whose successful record up until 1961 gained him promotion into a key role organizing the failed Cuban operation under David Atlee Phillips. When it comes to understanding power in the United States, there are two defining periods: before the Bay of Pigs, and after the Bay of Pigs.

A credible witness also places Morales in the ballroom of the Ambassador Hotel in Los Angeles when Bobby Kennedy was assassinated. The man with his head tipped back and his hand on Morales' arm happens to be the last director of the CIA, Porter Goss. It would be nice to know who took this picture, particularly because the head of the table is vacant. Winfield Scott was station chief in Mexico City, but because CIA cables to him omitted basic information about Lee Harvey Oswald, it's doubtful he was at the head of the table. Or in the loop. Philips became CIA station chief of Mexico City later in the year, and was officer in charge when Lee Harvey Oswald visited Mexico City in September and October of 1963. The CIA has steadily disavowed all involvement with Oswald, but after being confronted with previously unreleased documents, retired agents have more recently admitted the highest-clearance office of the agency (the SAS, tasked with Cuban regime change) held a "keen interest" in Oswald.

Plenty of people will dismiss E. Howard Hunt as just an old man off his rocker, say that he had Alzeheimer's, an angle, an axe to grind. And maybe he did, but he was the real deal, and whatever motivation he may have had pales in comparison to what the guys in the picture had for fires in their bellies. As a group, they don't look too worried. More like the joke is on us, like they're a close team enjoying themselves in the "La Reforma" nightclub at a table of honor. And it's pretty likely that every one of them knew George Bush, because Zapata Offshore Oil Corporation supplied the landing boats for the Bay of Pigs invasion, and George H.W. Bush owned that corporation at the time. The CIA code name for the Bay of Pigs was also ZAPATA. At the very least, Bush the Elder was a covert bit player in Operation 40, was booked into the Sheraton Hotel in Dallas on November 22nd, 1963, and called the Dallas police on the fateful day, warning them that an assassin from Houston wanted to kill Kennedy. That phone call would serve as distraction and cover for the operation, and more importantly, as an alibi for the caller if necessary. But that's the topic for a follow-up post.

I bet there's a lot of unseen baggage and bodies hiding behind that one little picture of happy campers in Mexico, particularly associated with the Latin American men at the table. But the stuff that peeks out is ugly enough. Hunt's wife died in a plane crash at the height of Watergate immediately after he demanded, and apparently received, hush money from the Nixon White House. For good measure, Barry Seal, whose widow donated the photo to the public domain, is seated next to Porter Goss. In 1986, Seal came to a bad end, murdered in a halfway house in Baton Rouge after making a plea agreement for flying cocaine in from Columbia. The only question there in connection to the JFK case was why Seal was prosecuted in the first place. For some reason, he lost his cover and was thrown to the wolves. Seal was important enough to have a copy of this photo taken by someone else, and his widow felt it was important enough to put out on the internet.

Some of the men in the picture above, like Porter Goss, and some of the unpictured plotters are or were very old friends of the family currently running this country, a family well-known for its volcanic hatred of the Kennedys. Hunt doesn't mention that name explicitly, but their pater familias was in it up to his eyeballs. What's it all mean for us? Directly or indirectly, Operation 40 handed down the keys of power to the Commander Guy we've got today. Hunt's audio confession is available at the Wikipedia page linked above and here.
Posted by MarcLord at 2:48 PM