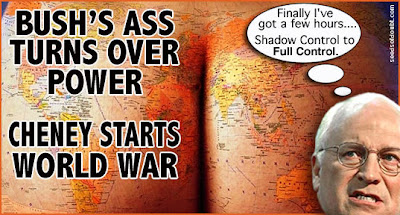 Impacts Of Iran's National Intelligence Estimate
One if by CIA, two if by Them and The Other 15 US Spy Agencies. (Update: The information in the fresh report, already available to many in Congress, finally came to light because staffers in agencies were willing to go on the record, with tape rolling, if it wasn't released. To put their lives on the line. Thank you, little big people. For a lively discussion of particulars, head over to Sic Semper Tyrannis in the right margin.)

As for the NIE mini-coup, that would be a "two." Cheney's office sent the report back three times while (according to the BBC) daily calling for bombing. They finally couldn't alter it or further block publication. The report says Iran has not had a boom-nuke program since '03, stopping one after we invaded Iraq to spread democracy. Internationally, the report has had immediate repercussions. Domestically, it signals a decline in President Cheney's ability to push the agencies around. At minimum. Now, some very smart folks like uber-blogger IOZ ask, "How many divisions has the NIE?" and argue the report lacks import...that it won't stop an attack on Iran. Granted, and potentially true. Cheney could issue the command to flying space monkeys to bomb at any moment. But would the space monkeys still obey, and when you get down to it, how many divisions has Cheney? He has no direct authority, not unless Dumya is dead. (Perish the thought. No, really.)

Arguing the NIE's relevancy distracts from why it came out now, the mechanism by which it did, and its immediate effects. Domestically, the report made it through a hostile steeplechase because NIE formulation is now vetted by multiple agencies, and does not allow reports to be drafted by special committees (such as the OSP, or Office of Special Plans) without inter-agency review. This is a significant albeit weird prospect. First, agency cooperation worked, and that itself is rare. Next, our would-be saviors are people who unleashed nocturnal death squads and gave Iran weapons technology (aka Iran-Contra) in exchange for winning an election and the release of Foreign Service hostages. But even they have reputations to uphold.

The unity of purpose engendered by a Pearl-Harbor-Like-Event has officially been reversed, and the desk jockeys inside the Beltway have rolled up their sleeves in anticipation of working with the next Administration. Perception may not be reality, but heavily influences behaviors shaping it. Current perception looks like a unified anti-Cheney conspiracy: Iran is "A Dick Too Far," and policy should shift to multi-lateral pragmatism. It's time to deal with the Iranians, not by bombs but negotiations.

The coup has taken a long time. Over the past three-plus years, the Bush family along with the CIA, Nick Negroponte, Bob Gates, Condi Rice, and many rank-and-file professionals have been steadily fencing Team Cheney further and further in. They all want what's best for The Empire, of course, but the gradual realization has suffused that attacking Iran over its threat potential or antagonizing it with rhetoric, ineffectual guerilla proxies, and half-assed non-uniformed Special Forces teams are rotten ideas. The State Department has had a capable undersecretary in Nick Burns, who has wanted to bring the Iranians to the bargaining table from his first day under Condi Rice, and he's been gaining traction. As a measure of that traction, the "Iran is killing our soldiers in Iraq" meme has been downgraded. The battle for GWB's soul will continue, but Iran has been re-positioned as a potential threat, not an imminent threat. Come to think, who isn't a potential threat to the Bush Administration? Israel, I suppose, which says the report is purely bogus.

Internationally, the report's bogosity or veracity is irrelevant. Its currency is highly valued, the calculus of its effects straightforward, the timing impeccable. It appears right before the UN council meets to vote on a third round of sanctions, and just before Iran's Ahmadinejad meets with the Gulf Cooperation Council this week, where he will pitch the idea of mutual economic security. The US case before the UN is weakened, Ahmadinejad's regional case is strengthened. Israel's case for bombing Iran is marginalized, while Russia's case against a US missile shield extending into Poland and the old Eastern Bloc is strengthened. The Saudi case against demonizing the Shiites to the north is weakened, and the case for belatedly adding Cheney to The Dustbin of History is strengthened.

"A Dick too far": lol, my vote for best new catch phrase. Applause!

The real story is the press' continued "shock, shock!," that the Bush administration has been lying. To paraphrase, if GW Bush says his mother loves him, check your sources. Even Bar can't be happy with this mess.

Yeah, I don't know how much more shock my electro-convulsive therapists can dish out. Before they kill me, that is.

As for Bar, you can make a serious case for her running the whole anti-Cheney campaign. Starting right after the last election.