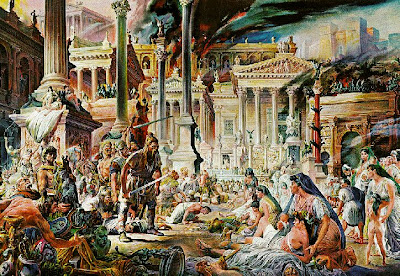 "Invasigration," Or How Rome Really Fell
We've all heard how Rome was sacked and burned by Teutonic armies. You may not have heard how angry, unpaid migrant farm workers took it over. How the last Roman rulers welched on their deals with Alaric (whose name in old German means "Ruler of All"), why he was Rome's protector and besieger, and how he mysteriously broke through the impregnable strongpoint of Porta Salaria in AD 410, which stood firm until urban renewal claimed it in the late 1800s.

Anyone who has lingered on history's frigid shores and recorded its tides like baseball scores will speak of the strange and spiny forms they poked upon in its slow-draining pools. It's uncomfortable in those places, but it's where you get the chance to know better. In 406 AD, after too many bitter winters, failing harvests and plagues, the Rhine froze solid over. Impoverished western Goths, tiring of a steady diet of starvation and fighting desperate Huns from the East, walked over the ice and headed to the ancient equivalent of California. Human floes made towards Rome, the source of power, engine of growth, the marvelous marketplace which could absorb all labor. At least it always had. Life may not have been grand for the lowest ranks there, but subsistence was delivered in its bounty, and if you worked hard, you could send some money home.

One empire is Before, another is Since. Precedent to conflagrations, their Falls are fertilized by economic refugees attracted from afar, by star-struck servants, by burrowing bureaucrats mumbling low, by slaves abundantly provoked. The classic imperial paradox lies in keeping one's gates open enough to attract brilliant influxes of diverse talent while closed enough to dilute your native-born middle classes slowly into overtaxed transparency. Empires must burn bright and preach perpetual motion, until in their final stages they start applying the salves and ointments of public relations perpetually to their burns, but provide neither self-interest nor integrity with fresh basis for vitality. Capital flees to a better engine, or at least to the next-best, and the torch is passed, most often by means of victory in battle. Sometimes, rare as Rome, there is no compelling substitute, no victory. Merely unending chaotic strife which achieves no order.

Empires are like prolonged, successful chemical reactions. They must expand until, facing hard choices of retreat or dispersal, they rapidly contract, or fall as hopeless romantics into entropy's embrace. Or perhaps: empires are more like families. To paraphrase Tolstoy, every happy empire is the same, every failed empire unique. Rome, for its part, fell after its Promise was over-extended and betrayed, hyped and hollowed into a gilded cage. What did Christian and slave mothers whisper to their Christian slave children? Even they must have whispered of deliverance from marauders, starvation, desolation, and wolves. Of bread. The Promise of Rome was prosperity and cooperation, feasts for the senses, security through Res Publica, some blessed separation of religion and state. The Romans were so like us it hurts, and it seems their self-image was nearly the same. Exceptional.

Even so, the erudite Western versions of Rome's final acts, the officially endorsed and hagiographic Historical Facts, they were rolled up in forgiving horse feathers. The Romans wrote their dramatic history to their own liking, and haven't been much taken to task. True, the decline and fall happened four or five centuries anno domini, yes, it was complicated, and yes, plenty of Germanni (in colloquial Latin, "spear-chuckers") applied to central casting for the role of Barbarian Horde. Yet far more tectonic fundamental forces than the Teutons and the Goths, forces which surpassed the control and comprehension of the actors, were the reasons Rome was burned in rage. It's strange how seldom, if at all, those factors are examined.

A tale was spun of Vandals and Visigoths, superhuman barbarians with big hands and feet who swept down irresistibly to dismantle all that was great and holy, bloody savages who couldn't be stopped. Then of course, capable of nothing else, they ushered in the next thousand years of the incompetent, illiterate, illegible Dark Ages. This is the central myth, the murkiest fallacy of Rome's demise. Easy enough to blame it on the Germanic tribes, who beat Julius Caesar himself into resigning to leave them to their wilds "east of the Rhine, north of the Danube."

Of these bloody savages, apologista wrote in language strangely akin to what we can hear in our times: "It wasn't our fault. No one could have imagined that jets. Would be used as missiles. To fly into buildings." As sins are still swept up and girdled into the guts behind cummerbunds, the Romans were cheerfully exculpatory, and contemporary historians do, after all, have to eat. Other empires less elegantly excused themselves gigantic stunning helpings of rapine, blindness, and incompetence. Spain had its blood-slathered conveyor belt of gold to worry about, Holland its water, wind, and java, the South its irreplaceable slaves, England its lethal appetite for coal. The Land of Burger King has had its equals in the fine art of threat conflation, and our trees are at home in all these forests. But are we Rome? Are we similarly doomed, standing likewise at the edge of a dozen centuries of darkness, about to be beaten by the great unwashed? There is much evidence to support a case for "yes." Let's examine some trees and forests.

Trees: Burger King upper classes over the last 50 years have entirely washed their hands of the military. To reinvigorate the services at their lowest post-Vietnam point, President Reagan attacked the Caribbean spice island of Grenada with full regalia. As if planned by Marius, our volunteer armies now increasingly attract disadvantaged and foreign conscripts who see a quicker path to benefits and full citizenship. Vigorous and wise military leadership is more likely to be passed to foreigners in the future, nicely congruent with Rome, whose legions were increasingly staffed and then commanded by the very Germans they so feared. Corruption is rampant, tax evasion for the rich is enshrined in law, the currency is devaluing. As each deck chair is frenziedly rearranged, the band plays on, because its musicians are being heavily tipped.

Forests: Our leaders do not understand the threats they face, nor do they even want to. Practical stances such as those sully carefully cultivated Beautiful Minds, through which pass timeless thoughts like these: "The Scythians, they're the rotters to worry about. They may rally in Honduras and strike at the heart of the Republic. My friend's company was vandalized in Asia. It was terrible, and the risk insurance may not pay. The vandals breed like lice, yet they make unreliable workers. They harness their women as oxen. They eat their peas with forks. Their spies walk free in our streets even as they take our charity. We must, we must extract more information. We're sorry if they go insane from pain, and we'll apologize someday. But we're scared. Oh! How could I forget the murderers of Samarkand? They hate us, and we must crush them. Again." These are the worries which distract from little problems like Global Climate Destabilization, drenching the planet in poisons conveniently absorbed through the skin, from screwing and killing people so badly for so long that their dearest wish is to strangle you to death with their own looped entrails. These were the thoughts of Caesars and their Senators.

Would the exceptional succession of fine Roman leaders in the second and third centuries have been able to deal with a huge, incipiently hostile human migration looking for shelter, warmth, food, and jobs? This was Alaric's source and base. It's very doubtful Rome could have absorbed millions of refugees, but if it had, yet more would have come. Even if the Romans had absorbed the Goths and pushed back the Huns who drove them, they could not have changed the Continent's climate, which for some reason had destabilized. It was the beginning of the Little Ice Age. The problem was systemic, dwarfed possible solutions, and leaders were overwhelmed by hordes almost without regard to the quality of either.

Speculating on the specifics of an ancient weather disaster is dicey, but it's not going too far to observe--if the Rhine froze over and the climate so shook the Germans they left their ancestral homes, one can imagine how bad it must have been for the steppe-borne Huns who pressed south upon them. Climate was the precipitant or dominant actor in Rome's fall. As Burger King's military corrodes, as yet more economic refugees become immigrants, as the polar ice caps melt with what we're told is irreversible rapidity, we may do well to ponder the inequities of Mexico, the needs and desires of Central and South America. They're all much closer than Rome was to Germania.

So the Romans had these gnarly chemical reactions that wowed the entire mediteratnian. then these freaking germans headed to the beach for spring break, and well, behaved like college students in Cancun? (I assume the Goths partied at night using religous objects and fire).

And when they ran out of food and things to burn, they just went home? Kind of like Kieth Moon in a hotel room?

So, are you saying that the falling dollar is turning our homeland into the neo-roman spring break mecca?

dude, that's heavy. must extend my chemical base to fully grasp.

The Goths would've loved spring break on the beach. And they must've gotten way bummed when the food and booze ran out. Which may be why they invented beer.

Yes, the falling dollar will turn us into spring-break mecca, and there will be plenty of Keith Moons in hotel rooms; what I'm saying is that the Promise of America, like the Promise of Rome, is something people want to believe long after it's gone. Then when they wise up, they get really, really pissed.

Swell post, I think. I just read a comment somewhere about how the "invading hordes" always came from the North. These days, the needy are already coming from every point on the compass to every other point. Lots of Roman-ish mcmansions to take over, too!

Man, I'm a sucker for flattery from English teachers. Always have been. Thanks!

You can fit a lot of folks into those McVillas, and Harper's "Index" section this month claims that 2 in 5 illegal immigrants move straight to the 'burbs.