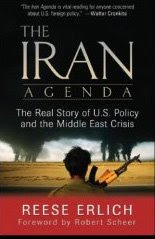 Will The US Bomb Iran...Or Should We Get Pakistan To?
At least one sober optimist says "No," almost convincingly enough to override my galloping skepticism. He said so in person, to an audience of me, my cousin-in-law, a fellow hordie, and 30-40 anti-war activists. How could this be? I'm not an anti-war activist! And my cousin-in-law may be an NSA mole. What were we doing there?

Well...of course I think bombing Iran would be the dumbest thing since the Children's Crusade, but it was only with the knowledge and encouragement my spouse that led me to an evening of dominant paradigm subversion. Lord Wife is a medical researcher of considerable talents who's on about as many list-servs as Isaac Asimov if he had been into email and weren't dead. Bombing Iran is a public health issue par excellence, so therefore, she knew that the Northwest International Health Action Coalition, along with a head-spinning variety of other organizations including the Network Opposing War on Iran (NOWI),was sponsoring a visit by Reese Ehrlich. Journalist. Author. NPR contributor. I and others went to the Keystone Congregational Church, not far from Casa Lord, to see him while my wife generously stayed home watching Lord Running Boy and his beloved cousin "Beatie" try to send each other to the ER.

Ehrlich was on tour promoting his book, 'The Iran Agenda: the Real Story of the US Policy and the Middle East Crisis,' and gave a slideshow detailing his visits to Iran and Kurdistan with Norman Solomon, on one trip accompanied for no explained reason by actor Sean Penn. They interviewed regular people while Sean Penn went first unrecognized, then was mobbed by paparazzi and autograph hounds. They met with journalists, and they crossed the border to see the anti-Iranian Kurdish guerillas (PJAK) who get their mayhem-funding from the US. Overall, Ehrlich's Iran spiel was well-reasoned, directly researched, delightfully positive and on-point; not only are we all sensitive people with so much to give, et cetera: too many important coalitions, not piss-ants like us, rather Coalitions controlling huge amounts of Money don't want Iran bombed. They want an Iran un-bombed not out of filial regard, but because they don't want oil prices to blow sky-high and make the looming recession any worse.

True enough. But has Reese Ehrlich ever witnessed The Attack Without Mercy? I didn't think so, and asked him: "Reese...if you were President...but you were from Texas, and were a former oil man...and your Vice President and mentor was a big-time Texas oil man...why would higher oil prices be so bad?"

Reese rightly answered that Bush and Cheney had obligations to all their Base, not just to the oil lobby. Rather than pointing out that those obligations don't matter much to, say, Israelis who think Iran has the launch codes to nuclear warheads on our Trident-class subs, or to religious fanatics who believe Armageddon will midwife The Messiah and The Rapture, or to national security hawks who believe Iran must be punished for humiliating The Empire even if it chooses to arm itself only with Stephen R. Covey inspirational date calendars, or to sadists who keep pictures of their dead victims in their desk and need to bomb stuff, I accepted his answer without antics. Actually, what I'd really, really wanted to ask him was, "Reese...do you think we can we get Pakistan to nuke Iran for us? Like, you know, instead of Israel?" (Damn. Should've asked it.)

Bottom line, he was able to get me to keep a more open mind that, no, it is not a fait accompli that the US will bomb Iran. After all, there are so many points in his favor, he could be right, and my reactive paranoia could remain sub-clinical. His practical explanations for bias in media reporting were the best take-aways, in line with his book, which says:

"Most American reporters I met saw Iran as an evil society and a danger to the United States. While many expressed disagreement with President Bush's policies, they believed Iran was developing nuclear weapons that threatened America. In short, their views tracked the political consensus emanating from Washington. Rather than proceeding from reality, they filtered their reporting through a Washington lens. When a Washington official makes a statement, even a false one, the major media dutifully report it with few opposing sources."

To paraphrase and assemble his off-the-cuff comments regarding how media bias works, and what to do about it: as a journalist at a major news outlet, you have to publish the story your editor wants you to write. Your editor works for one of three news corporations, none of which is at all interested in journalism. If you still happen to have your own opinion, insist on working for major media anyway, and you can't get a CIA or State Department official to go on the record with dissident information or views (thus risking their careers), you don't have a chance in hell at getting your story out. Pro-Washington, pro-Empire media bias isn't not only unsurprising, it's institutionally guaranteed. Read or listen to people interested in journalism, or advocacy, and make friends with Iranians.

I recently read Persepolis, a graphic memoir by Marjane Satrapi, born in Iran in 1970. At first I thought it was kind of odd to be reading a rather fancy comic book, but she engaged me completely. No elaborate analyses, but straightforward, from the heart depictions of their experiences under the Iranian "cultural" revolution...

Wow. Naj over at Iran Facts (linked to under 'Caravanserai') told me about Persepolis. And of course Dick Armitage uses it as an example of muslim oppression, true enough I suppose, I just shudder to think of what would happen if the wingnut Christians took--oh...crap.