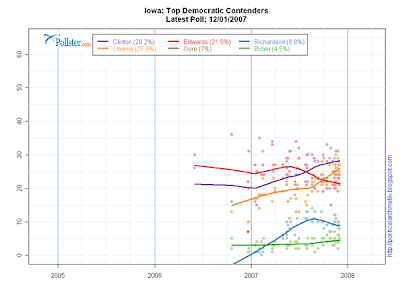 Barack Obama Only Democrat To Defeat All Republicans In Zogby Poll
It's just a poll, but it confirms metrics and instincts that Barack Obama is the most electable presidential candidate. He's claiming more mindshare.

In a Zogby International poll, Hillary loses by 4 and 5 percentage points to Republican candidates Giuliani and Huckabee, respectively. Not good. Whereas Barack Obama performs a net 13 and 10 percentage points better against each, beating Giuliani by 9, Huckabee by 5. The numbers resound in terms of electability measures, and should cause further state-by-state coalescence of Party support around Obama.

Amongst voters declared Independent, Obama beats Giuliani by a crushing 56% - 31%, whereas Clinton trails Giuliani amongst Independents by 43% - 42%. Not even the swing voters go Democrat under her nomination, which is probably the most damning number in the poll. Winning candidates must attract swing voters. Hillary does edge a Romney race by 2, beats Thompson by 6, but loses to limping soldier McCain by a depressing 7. There must be hope in McCainville tonight.

Huckabee is the strongest candidate amongst the Republicans, but he probably can't win more than 1 or 2 small coastal states vs. Obama, whose United Church of Christ bona fides make him competitive in states like Tennessee, Missouri, Arizona, Georgia, and his mother's birthplace, Kansas. The Zogby results in full are here.
Posted by MarcLord at 10:47 PM

Very encouraging trending for BHO, but we have to note this poll is three weeks old, which is a long time.

True, Mr. Vigilante. My hunch would be his trend has continued even stronger, particularly given the signs of desperation in the Hillary camp. But my other hunch is that the party establishment (in D.C.) wants the nomination to go to La Clintonessa.

No question, Marc. They're calling it 'The Restoration' Very diagnostic, if you ask me.

Obama seems to be the most honest among the front-runners. Kucinich is a good man, but the MSM have held him down, just as they're doing to Ron Paul on the Republican side. They don't want their apple-cart upset.