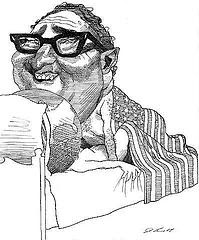 How Henry Kissinger Saved The World
Ah, the good old days...like they were in Washington, D.C., 1972:

Nixon: See, the attack in the North that we have in mind...power plants, whatever's left--POL (petroleum), the docks...And I still think we ought to take the dikes out now. Will that drown people?

Nixon: No, no, no...I'd rather use the nuclear bomb. Have you got that, Henry?

Kissinger: That, I think, would just be too much.

Nixon: The nuclear bomb, does that bother you? I just want you to think big, Henry, for chrissakes. The only place where you and I disagree is with regard to the bombing. You're so goddamned concerned about civilians, and I don't give a damn. I don't care!

Kissinger: I'm concerned about the civilians because I don't want the world to be mobilized against you as a butcher.

Just remember that HAK was the guy who explained why we had to punish Iraq for 9-11: Afghanistan just wasn't enough.