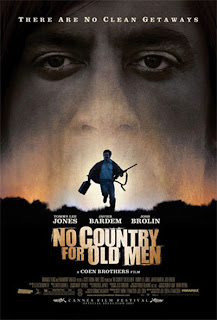 No Popcorn For Old Men
I've seen almost every known Coen brothers movie. I watched 'Blood Simple' in the International Cinema screening room in college, have quoted lines from 'The Big Lebowski' to my doctor ("Mark it 8, Dude!"), bought the soundtrack to 'O Brother, Where Art Thou?,' and 'Miller's Crossing' pretty much describes my job. Sometimes John Goodman storms unbidden down the flaming hotel hallways of my mind's eye with a shotgun roaring, "I'll show you the life of the mind, I'll show you the life of the mind!"

But I'm not going to see No Country for Old Men. I'm more curious about why the Coen brothers agreed to make the book into a movie at all. Those who have read the Cormac McCarthy novel of the same name, the title ripped off from a line in Yeats' Sailing to Byzantium (nice way to earn a Pulitzer, Co-mac), will know there's no artistic reason to make a movie out of it.

For those who haven't read it, nor seen the movie, I'll gladly spoil it with a review: there's a foreign super-assassin loose in New Mexico trailing stolen drug money. He has a strangely scrupulous, murderous moral code. He tracks and kills a Vietnam vet who found the drug money and wants to keep it. The sheriff played by Tommy Lee Jones is a war hero but can't catch the killer because he's a super-assassin. After killing the Vietnam vet and recovering the money, the super-assassin, name of Anton Chigurh, goes and kills the dead vet's young, innocent wife. Why? Because he said he would do so, and a promise to death is a promise. Tommy Lee Jones then feels very bad, and retires, knowing that pure evil is still out there and he wasn't man enough to stop it. Are we redeemed yet? No. And we never will be. Roll credits.

So to the Coen Brothers: screw you. Yes, I do mean both of you, Ethan. Why don't you go and do a re-make of The Hudsucker Proxy. That'd be fun. Better yet, start making children's movies. Here's a suggestion from the Winnie the Pooh genre:

Now that would be progress. And Cormac McCarthy, you need to start writing children's books. How about this one?

I'm sure Francis Ford Coppola would be willing to direct. Let him.

Ouch. You obviously have not heard about "literary string theory." This is when a writer or otherwise creative type takes a story line, adds other facts to it, and possesses the original work's soul. When done for bad, it is a vampire effect, when good it approaches devine. Jesus is the limit case in the western world.

It is really hard to do and win. I know nothing one way or the other about the movie, the book, or whatever. But the story can live on, even if the cast does not.

The Coen Brothers aren't no strangers to that, right from their first student film. And that's fine. Cormac McCarthy has made a protracted study of American violence. Too protracted. Maybe he hopes that by taking our violent history and pushing it further, he can alter it. I think he just begs for more and different, which is the appeal of the book and film.

The fact that No Country Like Old Men is going to garner 7 or 8 Academy Award nominations doesn't dissuade. It's just a violent martini with a twist, a dirty book meant to be dirty, which on screen will be simply gratuitous. The movie could've been done very capably by many others, as far as it goes.

You can mess about in the book's symbology about America going to Hell and the Mexicans, sure, but we already frigging know that.