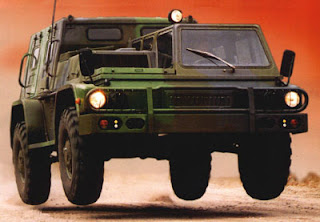 The Unquestioned Orthodoxy
Bruce over at The River Blog (yes, it's that Bruce and that River) posted a contemplation of capitalism's effects, written by Ob Fusc from the Deobfuscation Zone. Bruce is a very capable filter and often catches high-blogsphere things of this nature. Here's an excerpt:

We're all coopted into reproducing this logic, this linear motion, which irrupts into contexts; this mode of working, which is linear, which converts nature and earth goods into commodities, and thence into capital. To which living rainforest is fodder; and the people who cultivate it an obstruction. this drive which knows no end, and which cannot be reasonable; irrupting into modes far wiser and richer, and overpowering them. How that must feel; the terrible merciless pulsing of an alien force.

And we are its living vectors, people at the centre; alive, anesthetised and comatose in a time of unimaginable drama. To be alive, let alone relatively young, relatively healthy, to have time to contribute, to have anthropophile energy to enact. To have integrity to practise. What a gift in spite of it all. The price of a reflex ego insurance is greater than people imagine; may the latter crack and run bankrupt, painfully so, ever.

Oddly, this imagery is very close to how George Soros describes the system of capital creation and flow in The Alchemy of Finance. Capitalist orthodoxy first began to really annoy me when I listened to a member of the Young Republicans get up in church about twenty years ago and deliver a sermon on how God Almighty wanted us to get rich through speculation and cheap labor. That may well be. But isn't capitalism is the same system which makes neighbors ignore your presence? And if it's so great, why hasn't it delivered the SUV I've been waiting for? As I said in Bruce's comment section, "I'm not buying it until one comes with Kevlar armor, front and side flame-throwers, and a turret ring to mount the optional .32 or .50 cal machine gun on it. It should be a biodiesel hybrid, and it should be called the Bitch-Master."