No Oil Favoritism To US? Why Not, Goddammit?
If what Iraq's VP says is true, it is an outrage. And it made me spill the battery acid I was about to drink. I mean, can't the US even plunder a country it has conquered and holds in its powerful grasp?? What's all this crap about "unitary executive this" and "dictatorial powers that" if it's not about beating up third world countries and taking stuff they're too poor to appreciate? And if Iraq wasn't invaded to steal its oil, so I can keep my car running, my Amazon deliveries coming, and doing my job as a corporate by consuming like an obsessive-compulsive nymphomaniac strung out on benzedrine, then...what good was it?

DAVOS, Switzerland -(Dow Jones)- Iraq's Vice President Adil Abdul-Mahdi Saturday rejected rumors that its thorny and long-delayed oil law guaranteed the U.S. access to a share of its oil, adding implementation of the law will happen after it had spent "some weeks" being discussed among Iraq's lawmakers.

"It's absolutely not true" that the U.S. or any other named country had preferential treatment under the proposed law, Abdul-Mahdi said, which is seen as essential to develop Iraq's battle-torn oil industry.

Oh. I see. It's not a law yet. It's "proposed." Ok, heart rate going down. Breathing. Breathing. But geez, now that I think about it, "proposed" could mean trouble.

The official declined to comment on areas where disagreements continue in the law.

The federal government and the Kurdistan Regional Government have clashed over the drafting of the law. The Kurds want control of oil resources in their territories and a big share of oil revenue.

Big foreign energy firms are eager to know what form contracts will take in the hydrocarbons law and how much, for example, of a given oil block or field will be owned by the Iraqi government and what level of cost recovery they can expect from the government for investing billions of dollars.

I know, I know. This sounds like a job for Batman. And Robin. And especially Cat-Woman. But there's really no problem with uppity Iraqis passing this law to screw us out of our oil. The Iraqi Parliament hasn't been able to gather enough representatives to vote on a damned thing in over three months. They're all waiting it out in Dubai, Jordan, and London. Let's hear what one of the refugees from parliament, neocon chum Adnan Al-Pachachi, has to say: 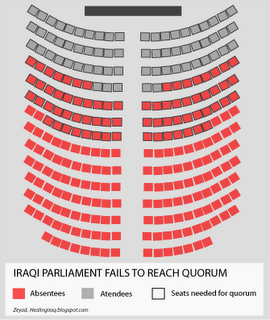 “People are totally disenchanted,” Mr. Pachachi said in a telephone interview from Abu Dhabi. “There has been no improvement in the security situation. The government seems to be incapable of doing anything despite all the promises.”

Though the Constitution grants Iraq’s only elected body wide powers to pass laws and investigate, sectarian divisions and the need for a two-thirds majority in some cases have often led to deadlock. Sunni and Shiite power brokers have blocked efforts to scrutinize violence connected to their own sects.

“Parliament is the heart of the political process,” Mr. Mashhadani said in an interview at his office, offering more hope than reality. “It is the center of everything. If the heart is not working, it all fails.”

That's right, Radar. If the heart is not working, it all fails. Just ask Dick Cheney. I don't think we have to worry about Iraqis giving our oil away for a long time. At least not legally.

(Hat-tip to Jesus del Norte over at Church and Empire for catching this story from the excellent Healing Iraq blog. And to the New Yawk Times for doing some reporting once in a while.)