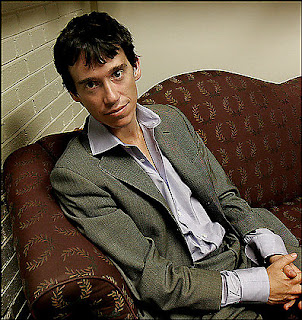 The Prince Of The Marshes
Rory Stewart, a former soldier, diplomat, and compulsive adventurer, took a taxi from Jordan to Baghdad in early 2004, looking for a job and thinking he could make a difference. Pictured at right for his Washington Post interview last August, he has probably written the definitive, adamantinely enduring account of the fall of Iraq.

It's a journal of his efforts on behalf of the Coalition and Western traditions to establish a functioning, stable democracy. He worked not in Baghdad, but in the impoverished Shi'ite southern part of Iraq; most other books which have emerged from there focus foremost on the Green Zone's hocus-pocus: Imperial Life in the Emerald City, The Assassin's Gate, Blind into Baghdad, Hubris, and Fiasco are the stuff of key actors, dicta, and grand strategies. The Prince of the Marshes: And Other Occupational Hazards of a Year in Iraq is different. It's a journal of how average post-Saddam people refused to swallow the hubristic, undigestible, and hypocritically half-stuffed haggis which the US and returning British baked; how some of them tried, how all of them retched, and how so many of them have died.

A couple months back I read Rory's other little cocktail-napkin masterpiece, The Places in Between, about his envigorating, self-appointed 600-mile hike across Afghanistan while war rained down on the Taliban in the winter of 2002. He claimed to be a historian re-tracing the route the Emperor Babur, conqueror of India, took with his small band of exiled followers on their way to take power in Kabul. Immediately after hearing of its existence, I went and got it. While briefer than one of Sir Richard Burton's adventures, it was no less dangerous, no less abrading, and no less, for lack of a better term, adventurous. His prose is honest and spare, his reverence for the regional history and poetry at once geeky, deep, and profound.

Having finished The Prince of the Marshes last night in my quest to appraise the effects of the bodkin plunged deep in my nation's back, I believe it's the kind of book which cannot be well distilled into a few paragraphs in a blog post, odd since the thing itself naturally consists of words, albeit 400 or so pages of them. I have the distinct impression a painting, a quilt, or something like a Bayeux Tapestry would be better suited to convey the force and complexity of the devastation, the poignant, roiling, reckless tragedy of what of late has happened in Iraq, in concert to the conflicts reaching back, gyrating all the way back, in fact, to the very terrarium of our origins.

This young man, a Scot born in Britain's last remaining colony (Hong Kong), educated at Oxford, keenly fluent in history, a Foreign Office veteran of Malaysia and Kosovo, was the West's factotum, the governor of the two provinces which lay in the lap of the Tigris and the Euphrates rivers...Maysan and Nasiriyah, which were Saddam's own unruly bete noirs and the cradles of civilization. In Nasiriyah stands the Ziggurat of Ur, and bandits loot 7,000 year old pottery there along with the copper wire of high-tension power lines. Rory's story of governing is a travelogue which doles out history human being by human being, observing each from the tawdry ground level.

When people in the future wish to examine where not one, but two, Empires went in all probability terminally wrong, they will reach first for this book, much like they do for Lawrence's 'The Seven Pillars of Wisdom' when they seek to read of the Ottoman Empire's fall in Arabia. It trumps all other accounts with its understanding, or at least its abiding contemplation, of the human condition. I will be quoting from it with some regularity. Both books reduce the world to a human scale, using their art, foibles, sacrifices, principles, aspirations, and needs as rich holographs for the abstractions of princes, states, rulers, and Machiavellian crafts.