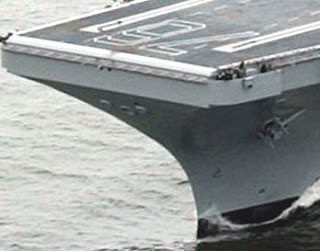 Heard of a van that is loaded with weapons
packed up and ready to go
Heard of some gravesites, out by the highway
a place where nobody knows
The sound of gunfire, off in the distance
I'm getting used to it now
Lived in a brownstone, lived in the ghetto
I've lived all over this town

Talking Heads, "Life During Wartime"
USS Reagan Assigned To Persian Gulf
C.B.G.B. I never new what it stood for. Since the venerable Manhattan punk club by that name has closed its doors, henceforth it stands in my lexicon for "Carrier Battle Group Blues." The USS Dwight Eisenhower is in the Persian Gulf, off Somalia near the Horn of Africa. The USS John C. Stennis should arrive to join it on station in mid-February. The USS Ronald Reagan should arrive in the region at the beginning of March, right after Admiral William Fallon is confirmed as CENTCOM commander. There is no need for 3 aircraft carriers there, except for an attack on Iran; this ain't no party, this ain't no disco.

It is possible the USS Dwight Eisenhower will rotate back, and the Reagan is sent to relieve it. This could go either way, and may be intentionally provisional, but very few people in the world know it, if so. Two of them are Dick Cheney and Donald Rumsfeld, who are absolutely determined to attack Iran, which they see as "unfinished business." And by the way, despite his resignation, Donald Rumsfeld still goes to his office in the Pentagon every day, and has a staff of seven people. Ain't retirement fun?

The same techniques of demonization are being used by the same suspects, going off the same old Project for A New American Century, Draft Defense Planning Guidance style sheets. "We have no plans to attack Iran," say the mouthpieces. Right. Cheney's staff wrote the plans in 1992. The US is escalating all over the region. Opposition groups are newly funded in Lebanon, Palestine, and Syria. US troops are in Somalia and Pakistan (and troops have been kidnapped in Somalia, google it if you care to), and Special Forces teams are in Iran.

As the last steps before a bombing campaign on Iran, Patriot missile defense systems will be put into Israel. B-2 bombers will be shifted to somewhere in the Mediterranean (Bulgaria is a strong candidate), and support ships and planes carrying lots of "jet puke" (JP-8 grade fuel) will appear nearby. These are small, specific, easy-to-miss signals, but should they occur, they'll provide 99% certainty of an attack on Iran. The web is a big place, so I'm asking you to watch for these signs; if I miss them, I'd really appreciate it if you let me know. There will probably be a propaganda push or a trumped-up atrocity to sell the war to the American public. But they're getting careless and disdainful of the public, so they may not bother to do this until after the fact. Watch the B-2 bombers and their logistics support. They're more reliable indicators.

(A big Hat-Tip to Bruce at The River Blog for catching the Reagan's assignment, and to Larisa Alexandrovna at Raw Story and At Largely for her ongoing coverage.)
Posted by MarcLord at 8:05 AM