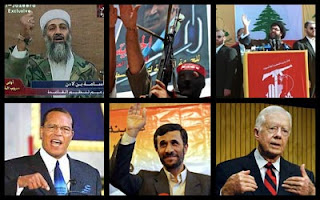 Jimmy Carter Exposed As Virulent Anti-Semite
America had a liberal president once who had an IQ of 175. Oddly, he is still alive. But not for long.

Jimmy Carter wrote and published a book recently, I think it was called "A Final Solution to the Jewish Question," and in it, he apparently suggested the troubles in Palestine could only be addressed if all Israeli Jews were herded onto ships and sent to Madagascar. This led to 14 Jewish board members of Carter's hugely unsuccessful human-rights promoting Peanut Foundation to resign immediately (i.e., shortly after one of them bought and read the book about six months after its publication):

"This is not the Carter Center or the Jimmy Carter we came to respect and support," adding "It is with sadness and regret that we hereby tender our resignation from the Board of Councilors of the Carter Center effective immediately."

The names of those who resigned were not given, nor were their responsibilities on the Carter Center Board of Councilors.

A recent op-ed in the Washington Times from a former Carter Center staff-member took the form of an open letter criticizing the former president. Yariv Nornberg, who worked with Carter, wrote that the book "puts all responsibility for the failure of the peace process on Israel...the reader gets the impression that Israel is the source of all wrongdoings in the region and that if it were just willing to comply with the Arab demands, peace would already be flourishing in the Middle East."

Yeah. That's right Yarvi, I got that impression, too. Carter's shifty, mealy-mouthed liberal response was:

"I'm tired of you fuckin' Hebes. Come on down here so I can show ya'll some Georgia Justice."

As for me, I think Carter's comments about Israeli apartheid and racism against their Arab servants are scandalous. I stand in solidarity with your noble apartheid, my Israeli brothers, long may it reign. And long live the memory of Meir Kahane! I just wish, my brothers, it was a little easier to tell you apart from the Arabs.
Posted by MarcLord at 6:10 AM