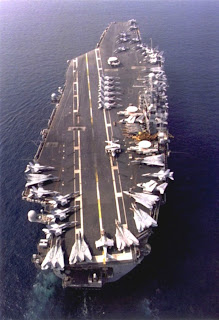 Breathing Room: A Handy Mid-East Metric
{Note: There are two carrier battle groups allocated to the Persian Gulf right now. The USS Eisenhower is off Somalia. The USS John C. Stennis left its home port of Bremerton, which I knew because it's local, as in uncomfortably close to my family, on rotation to the Gulf. If you hear from me or anyone else that there are about to be three carrier battle groups (CBGs) in the Gulf, look to confirm it because that is your signal for the imminent commencement of a sustained, 24-hour bombing campaign on Iran. The US military will not put three CBGs in the Gulf unless it's going to attack Iran pronto. A little Googling turned up a copy of Tuesday's "The Nelson Report," which lobbyists, congressional staffers, and companies subscribe to for upwards of $25k per year (and not available on the web). Esteemed blogger Steve Clemons at The Washington Note had it up, bless him. He gave us the definitive inside scoop, and for once it's positive.}

IRAN. . .recent news stories out of the Middle East seem to be generating a sense that Iran is closer to a successful nuclear weapons capability than had previously been thought, and that the risk to Israel is rising to the point where Israel is moving closer to a decision to "take out" the Iranian nuclear weapons facilities.

Yes, it does seem to be true that Iran has accelerated its program to bring on line the 3,000 centrifuges required to generate nuclear fuel. . .but it also seems true (and not Iranian disinformation) that of the 50 centrifuges recently hooked up, all 50 blew up.

Could be sabotage. Or it just could be the temperamental character of the devices. Especially if they're rushing production. Supposedly they solved an earlier problem by making technicians wear gloves when assembling the devices. The grease on their fingerprints was apparently causing the rotors to tip and crash once they got spinning in earnest. That is how sensitive these things are.

OK, but what about all the neo-con noises here in the US about meeting militarily the "accelerating threat" from Iran? Our source offers this perspective:

The change is in atmospherics. So far as I know, the technical developments are correctly described here.

The real story is that Iran is going to go right ahead defying the UN, the Russians will protect them from being squeezed too hard, the Israelis will fret, the Sunday Times of London will make up alarming tales, the State Dept will temporize, and despite all this, the Iranians will not have the wherewithal for a Bomb until the next Administration takes office.

By then, they will be closer, of course. Nobody knows what's going to happen when they get there, including whether they will try to take advantage of having the wherewithal. It's an unwelcome development, but it's going to happen, subject only to the identity and inclinations of the next president of the U.S.

So don't panic. There's no point.

Last but not least for tonite, what's the strategic implication of the recent US Navy carrier deployment announcements to all this? Obviously, as we have been reporting, the professionals have been warning the White House and associated neo-cons that any actual military action against Iran itself runs a huge risk of effective Iranian retaliation against US interests, allied shipping, and oil.

We asked a friend out on the West Coast for his assessment of the new deployments, which confirms the actions ARE aimed at Iran, but in a balanced way, all things considered. For something really "up", he warns, watch to see a change in deploying the Nimitz:

(Stennis strike group had been scheduled to cover routinely for USS Kitty Hawk in the western Pacific this spring while the Yokohama-based carrier underwent repairs. The Pentagon announced 20 Dec 2006 that Stennis strike group would sail early, deploying instead to the Gulf. The Pentagon announced 11 Jan 07 USS Ronald Reagan would skip normal work-up phases and deploy within several weeks to provide the routine coverage in western Pacific during Kitty Hawk's repairs.)

Last week the Pentagon also announced deployment to the Persian Gulf region of a Patriot battalion of the 11th Air Defense Artillery Brigade, which is primarily suited for defense against short-range ballistic missile attack. The primary ballistic missile threat in theater is Iran. UK will contribute two minesweepers and a frigate.

OK...so what does this mean?

The deployments are aimed primarily at Iran. USG cites Iranian material support for attacks on US personnel and states concern that Iran and other opponents may view U.S. as vulnerable. As the new strategy unfolds to clear and hold Baghdad neighborhoods, protecting both Shi'a and Sunni populations while jump-starting economic and political recovery, and as US clears Iranian networks providing material support for attacks on US forces, USG is rational to have theoretical concern for possible retaliatory strikes.

This concern is amplified at the margins by tensions over Iran's nuclear program. Scenarios could include opposition strikes on US assets and Persian Gulf shipping.

Isn't this going to spur on the crazies in the Amadinejad camp?

This deployment is carefully calibrated. It could have been larger. Increasing to two carrier strike groups in the AOR serves as a firm signal and deterrent, reminding everyone US has bench strength; the US also still can "reach out and touch someone."

Along with announced deployments of two UK minesweepers and the Patriot battery, it is also an actual contingency force that has significant defensive and offensive capability (e.g. ., could initiate heavy 24 hour air ops if necessary).

OK. . .what to watch for if the US really thinks bad things are about to happen?

On the other hand, increasing to three carrier strike groups would be noticeably more 'robust', belligerent and suggestive of intending or anticipating attack. The difference between two and three strike groups is huge. Two ='s strong and capable, but existing offensive intent is less probable; three ='s 'we don't care about provocation, we're preparing to fight in this new dimension'.

(An indicator would be to watch for announcements about Nimitz strike group; Nimitz reportedly has completed the routine pre-deployment work-up and is in San Diego.)

Creepy with a capital "B". Why is the public saying so little about this ginning up another war front? Thank you for "the good stuff" Marc, while frightening there is a certain comfort in knowing rather than not knowing.

Geez, I'm just positive we can trust our new Congress to head this off at the pass. Right? (eyes roll skyward)

Seriously, Nelson's sources ring true and I take them as relatively positive. The new SecDef is pressing Iran in a more classic way, attempting to carve its influence out of Iraq while sowing doubt domestically about Ahmadinejad. Militarily, Gates is not an idiot. Unfortunately his boss (Cheney), who wanted to drop the 101st Airborne Division onto Baghdad in Gulf War One (no, really, he did) is most definitely is a military moron.