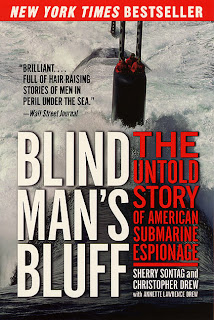 Speaking Of The Straits Of Hormuz...
Boy, they don't call those sub-dudes "The Silent Service" for nothing. The crew of the USS Newport News is going to have to sit there and take it with straight faces while salty mariners make sport of them in every port. Imagine one making a few antic gestures as he sidles up in a bar to ask, "So...how was she?" The old salt would be referring to the Japanese oil tanker the USS Newport collided with on Monday. Tanker, meet sub. A match made by Neptune. "It's ok, fellas. We understand. A sub gets awful lonely on a cruise, skulking around down there for months at a time."

Published details were sparse, except to say the damage was nothing much to write home, or for that matter a newspaper article, about. And, ahm, the submarine was surfacing at the time. And, ahhh, the accident occurred somewhere south of the Straits of Hormuz, and gosh, doesn't it make you recall the time a US sub surfaced underneath a Japanese training yacht while demonstrating an emergency maneuver, capsizing it and killing a bunch of civilians and high school students?

No, no, actually it didn't make me recall those happy-go-lucky hijinks. Not at all. Because I was too busy wondering why I'm expected to believe a submarine with the most sophisticated underwater listening and imaging technologies missed the sizeable, deafening, and fairly important presence of a Japanese oil tanker directly above it. And how a submarine would plead deafness, dumbness, and blindness while on combat operations in the Persian Gulf.

Here's what really happened: the Newport News was using the tanker as cover, as a very effective sonar shield and signature eraser. It used it to sneak past the hearing aids of the Iranian navy, staying tight underneath as it proceeded into or out of the Straits. The sub was surveying coastal defenses. An ardent but respectful relationship with the tanker could've finally been consummated for one of several reasons; an unexpectedly tight underwater navigational squeeze, detection by shore defenses and resulting evasive maneuvers, or detection by an Iranian submarine (they have pretty good ones) which played a game of "chicken." Chances the collision was a flat-out stupid mistake are remote.

Update: Confirmed. The USS Newport News rear-ended the tanker ship as it was passing out of the Straits on its way to Singapore. Various connotations of the term "rear-ended"can be piled on to the ribaldry already noted above. The submarine was shadowing the tanker and hiding in its propreller wash, a time-honored way to escape detection. I'm speculating about the specific missions the submarine was performing in the Straits, and about reasons for the collision, but those are the sorts of things subs are made for, and sometimes they get into all kinds of trouble we don't hear about. It would seem that happened here, because there's only one way subs have ever hit tankers, and that's intentionally. With torpedoes.

Update, Aha: Looks like there was some evasive maneuvering. Sailors on the tanker are said to have heard a loud bang and felt shaking before the sub hit them. Iran has jet-propelled mines which are designed to lurk on the sea floor, and then be activated remotely or automatically and steer towards a target:

The Mogamigawa was traveling from the Gulf to Singapore and was carrying a crew of eight Japanese and 16 Filipinos. It is expected to arrive in the port of Khor Fakkan later Tuesday, company spokeswoman said on condition of anonymity, citing protocol.

She said crew members reported a sudden large bang and shaking just before the collision, but no other details were immediately available.

The Japanese government has asked the U.S. side to investigate. Ahndahl said a Navy investigation would begin shortly.

I wouldn't wait on that Navy investigation. But with mines like that, it wouldn't be too hard to block the Straits: by sinking tankers filled to the brim with oil. And burning the oil slicks. Food for thought on my next trip to the gas station.