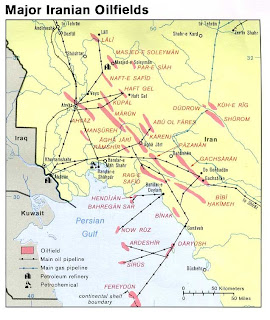 Iran's Short, Iterative History
Ah, Najaf. How fitting it was set free to fend for itself today. Naturally, Najaf brings Iran to mind, since it was where Ayatollah Khomeini lived for 12 years when he was exiled by the Shah. So where did Iran come from, anyway, and why is it so bitchy all the time? In the spirit of "know thy enemy," I'll try to write down what I know, which is admittedly not much and certainly flawed, but it'll at least be fun for me. And who knows, something might come of it.

Iran is basically modern Persia, which has been a thorny but influential outlier for about an eon, and is arguably the oldest continuous civilization on earth. It was conquered by Islam in the 7th century and then a enjoyed a kind of Renaissance, amassing wealth and wisdom until repeatedly destroyed by waves of Mongols starting in the 13th century. Much earlier, it was the birthplace of monotheism and holy writ, when the Prophet Zoroaster received his revelations of heaven, hell, Satan, and morality directly from god 8,000 years ago.

As "Iran," it's a relatively new and quite genuine nation, having undergone a series of democratic revolts starting in the early 1900s. These were eventually successful in abolishing a corrupt old regime (one whose name escapes me, but which had become bankrupt and signed away its largest oil field to Britain to clear its debts); the revolutionaries managed to adopt a Constitution and establish a parliament by or before 1925, retaining the monarchy as figurehead. Thereafter, Iran continued to be batted between the intrigues of British and Russian imperial ambitions in the region, as it still is to this day.

Unlike all its neighbors, however, Iran was never colonized, although some would say corporations succeeded in achieving the same effect for a time starting in the mid-19th century, culminating with the ascendancy of British Petroleum. After its consititutional reformation in around 1920, Iran's monarchists struggled to regain their former powers by bargaining with outside powers, while religious figures for and against constitutionalism sought to either impede or aid the monarchists, and at times vice-versa. A leader in the constitutional revolution, Reza Khan, became Shah and was skilled at playing realpolitik amongst the powers, but he played too closely with the Nazis and was deposed in a coup in 1941. His son, the popular, handsome international playboy Reza Pahlevi, was installed in his place and was widely seen as a puppet-king of England. Out of this bubbling, jumbled political lobscouse soon rose the two populist figures who would most define Iran's future: Mohammed Mossadegh and Ayatollah Ruhollah Khomeini.

Mohammed Mossadegh was a beloved elder statesman who was elected the first Prime Minister in a landslide and founded a fully democratic government in 1951. A steadfast anti-communist, Mossadegh was also a nationalist with little love for the British; known for his sense of humor and common touch, he studied political science in Paris and received a doctorate in law. Working on a legal basis, parliament quickly legislated to re-possess the oil fields worked by the Anglo-Iranian Oil Company (or BP), seizing its equipment and revoking its leases. British warships responded by threatening to blow up any oil tankers which left Iran, leaving it with no way to bring its oil to market. Despite the economic consequences, Mossadegh remained enormously popular. BP spurned all offers to negotiate a settlement, demanding not only restitution of previous fields but full control over all Iran's oil. Britain, still suffering from WWII, couldn't bring Mossadegh down and couldn't keep up its oil embargo comfortably, so it turned to the US for help.

Seeing the request as a way to contain Russia, Eisenhower approved enthusiastic CIA plans for a military coup (an outgoing Truman had rejected the idea). The operation was called Ajax, after the popular detergent brand. Kim (Kermit Jr.) Roosevelt, grandson of Teddy, was sent to Tehran in 1953 to run the op under his cover name, Jim Lockridge. The first coup was a farce, with the Shah deposed and sent packing into exile; less collegial expedients were next employed.

General H. Norman Schwarzkopf, Military Governor of Iran from 1942 until he was sent to help run Germany in the late '40s, was sent to fix the situation. He directed a colonel to roll a few tanks up to the Prime Minister's residence and shell it with high explosives. Mossadegh surrendured, was tried for treason, and imprisoned. The Shah returned to rule as figurehead. In reality, Schwarzkopf Sr. (father of the General who commanded Gulf War One) continued to run the country as Military Governor with the help of the SAVAK, the secret police he had founded to eradicate communist sympathizers in Iran during WWII. The SAVAK, notorious for their complete lack of charm, were turned onto the constitutionalists.

This was less than popular, and resistance retreated to brew in the mosques. Then Ayatollah Khomeini, a seyyed (holy man descended from the Prophet) admired for his grandfather's resistance to the British, the martyrdom of his father, and for his reform-oriented writings on Islamic doctrines having political relevancy, was designated to be the voice of resistance against the government when the Shah attempted a series of liberal reforms in the early 1960s. He denounced the Shah, was arrested, jailed, and then exiled to Iraq. To Najaf, where he stayed until Saddam Hussein threw him out for his subversive writings on the Islamic Revolution, and where today in public the leader of the local secret police bit the beating heart out of a rabbit with his teeth. My, how things hop around in the Mid-east.

The Shah's Islamic Revolution succeeded when an estimated 10 million people took to the streets of Iran one day in early 1979 to stop work and demonstrate against the Shah. Coincidentally, the US had just licensed technology for nuclear power and had started building a plant a year or so prior, and Mitsui (a Japanese conglomerate) had nearly completed its gigantic $3.5 billion oil refinery. The Revolution was deemed very inconvenient, and there were calls to fix it, all of which were either unrealistic and rejected by the Carter Administration, or unsuccessful. In the Fall, Saddam Hussein's forces invaded Iran to seize its oil fields, but they were unexpectedly well-defended and, years later, were rolled back deep into Iraq. In November of 1979, the US Embassy in Tehran was denounced as a den of spies, was stormed, and its staffers were taken hostage. Iran announced an oil embargo, and oil prices skyrocketed by 150%. Sometime over the next year ex-CIA Director George H.W. Bush, James Baker III, and Bush's former mascot at CIA, Robert Gates, went behind the curtains to delay the release of the hostages on behalf of the Republican presidential candidate, Ronald Reagan, a stunt which would come to be known as the October Surprise. The hostages were freed on Reagan's first day in office. The deal was said to have been consummated for 40 million dollars and some vague promises of future advanced weapons sales.

So there's the backgrounder on Iran's bitchiness, on the whole mess. I'll skip over the continuing wars in 80s and 90s and the millions of combat and civilian casualties. By further coincidence, Robert Gates is the new Secretary of Defense, and is making his first visit to Iraq today in that capacity. Welcome back, Bob. Care for a rabbit?

Note: Most of the above is off the top of my head, boned up on while a former library rat two decades ago. While the substance is reliable, I could have some dates wrong. Some is speculative, for example I don't know for a fact Bob Gates was part of the hostage negotations, only that he was later convicted over Iran-Contra involvement. I don't know George HW Bush was either, but did read published and credible accounts of his presence on a US aircraft carrier in the Persian Gulf at the height of the crisis. As for Jim Baker, as Bush consiglieri, it only makes sense he was involved, but I've seen no evidence of it whatsoever. Finally I suspect Russia invaded Afghanistan to capitalize on the Shah's weakness and had designs on Iran's oil, and that Zbigniew Brezinski as Carter's SecState saw the opportunity to thwart Russia and trap it, and so began funneling arms into Afghanistan early on as a response. But that's just pure speculation in the absence of scholarship. What is not speculation is that the Democrats, not the Republicans, first started sending arms to the mujahedin in Afghanistan.

Update: I just looked up SAVAK on Wikipedia. It incorrectly states it was founded in 1957. Rather, it was founded as an anti-communist secret police by H. Norman Schwarzkopf, probably in 1943 or so, and simply changed names in 1957. I'm not sure Schwarzkopf's organization had a formal name, but the security apparatus and staff remained largely intact. The Wikipedia article claims some staff remain from pre-Revolutionary Iran.

I linky-loved this at my site on today's post.

Thanks, Hope! I'm truly flattered. I'm also diggin' your Goodman posts, and just tried cross-posting you. Hopefully this was ok to do, let me know if there's a better way to do it, or if you prefer I not do so. Also, I'd like to recommend your post for more visibility. Have you ever used digg-it or del.icio.us? I have not, but am willing to learn on your say-so.