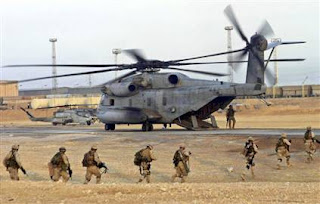 F-16 Crash Follow-Up, Pt. IV: A Semi-Controlled Descent
A CH-53 carrying 16 US Marines crashed into a lake in the Anbar Province yesterday, making it the fourth helicopter to "have mechanical problems" and crash there in the last 7 days. This particular crash at least warranted a brief Associated Press release, although it was described as "an emergency landing," one "in which the pilots maintained control of the aircraft the entire time."

Oh, really? Then why did the pilots choose to land in a lake? My guess is because, had they maintained control the entire time down into the ground, all aboard would've died. Fortunately, they were apparently able to just make it past the shore, and only 4 Marines died rather than all 16. This incident may really have been due to mechanical failure, but the careful wording of the release and lack of interviews merit serious doubts, and certainly not all the crashes this week were accidents. The Sunnis are getting MANPAD-style (modern portable surface-to-air missiles) from somewhere. I doubt SA-16s or SA-18s from Iran, but maybe directly from Russia or China.

There is another strong contender for the source of the missiles. Last week, on Cheney's trip to Riyadh, Saudi Arabia probably threatened him with retaliation if the Sunnis in Iraq were hung out to dry in a "Salvador Option." The Salvador Option refers to choosing a side, ostensibly the Shias, arming them and backing them with US trainers, advisors, and air support; this were the methods credited with suppressing communism in El Salvador in the 1980s. Death squads, in other words. (See Newsweek story, "The Pentagon may put Special Forces-led assassination or kidnapping teams in Iraq.")

From King Abdullah's perspective, shooting down four of his aircraft on the same day you're meeting with an uppity company's sales rep is a very effective way to make your point clear, while leaving your chain-mailed fist covered in velvet. It's a way of saying this: "If Iraqi Shias are unleashed with American backing on the Sunni Triangle, it will ignite Sunni Arab rage, a full-scale regional war, and deep financial disturbances." Yes, I just referred to Dick Cheney as a sales rep. You see, there's a better way to think of Saudi Arabia's rulers, one much more in line with how they think of themselves: as the largest shareholders in the corporate entity which refers to itself as "the United States." Cheney was summoned to Riyadh, not dispatched as US newspapers would have us believe. Faisal, Bandar, and Abdullah have all referred to the US as "my blue-eyed slave."
Posted by MarcLord at 9:23 AM