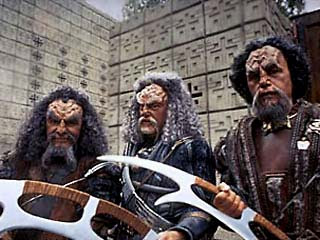 Star Trek: The Lost Iraqi Security Episode
Seems US forces are doing the victory monkey thing in Najaf today, handing over the city's security to indigenous police and army units. Here's an Associated Press account of the ceremonies:

About 1,500 police officers and soldiers paraded on a soccer field, and other officers drove shiny new patrol cars and motorcycles around a dusty track ringing the field.

At one point, a small group of elite Iraqi special forces officers wearing dark green T-shirts stepped forward with a live rabbit and ripped it apart with their teeth.

The leader chomped out the animal's heart with a yell, then passed around the blood-soaked carcass to his comrades, each of whom took a bite. The group also bit the heads off frogs.

Tearing a live rabbit apart with your teeth. That's class. No school like the Old School. The frogs seem a little show-offy, though. Oh, well, when in Rome; anyhow, the Iraqi chapter of PETA is probably keeping a low profile until things settle down a little. It must've been a tough act for the master of PR ceremonies to follow: "Right, then, commander, now if you would take the frog's head out of your mouth and be so kind as to say a few words on this fateful day, we'd be pleased to translate from your native Klingon."
Posted by MarcLord at 11:29 AM