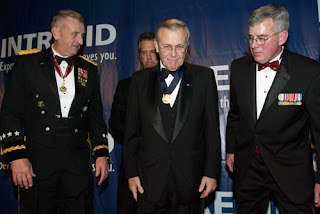 Rumsfeld...Donald Rumsfeld
I've started to honestly believe we're living in a Banana Republic. I mean, there's no shortage of bananas, there's a clothing store going by that name in almost every mall, and why else would one of our oldest and most respected national organizations have given Donald Rumsfeld a "Gold Medal" award last night, unless we were living in a dictatorial regime? I mean, pretty soon we'll have goon squads running around, wearing black ski masks and uniforms, breaking into people's homes, and an El Presidente in the thrall of gringo corporations passing out phony medals to thieves. (Oh. Crap.) Until 20 minutes ago I had no idea who or what the Union League is, or why they think it's a good idea to humiliate themselves on the world stage by giving Donald Rumsfeld an award. Geez. Pretty soon the thought of popping Wikipedia open could start to give me the shakes.

Turns out the Union Leagues were set up back in '63 (that would be 1863) to support the policies of Abraham Lincoln, things like federalism, anti-slavery, and the Republican Party. Therefore, I assumed there must be another Donald Rumsfeld, and was thinking this must be a mistaken identity thing, you know, like in The Big Lebowski, where loan sharks send two tough guys to rough up the wrong Jeffrey Lebowski, beating him and holding his head down in his own scummy toilet, flushing repeatedly. (Oh, gosh. I'm projecting revenge fantasies again.) But, no, it's the right Donald Rumsfeld. Despite an intended lack of publicity, some of the invitation-only Union League members broke with etiquette to leak the story to a Philadelphia paper:

'Club member James A. Ounsworth told the paper that he was "astonished and ashamed" because "Rumsfeld is a failure. I don't think you should give an award for failure."'

But Jimbo: where in bloody hell have you been? We've been giving awards for failure for the past 6 years! 30 or 40 protesters showed up screaming with signs not because they were hippies, lefties, or commies, but because they are Republicans whose relatives are or were members of the Philadelphia chapter of the Union League, and who somehow felt the integrity of their beloved, AKC-certified pedigree institution was going straight down the tubes:

"My family is traditional Republican, and they are sick about the Union League giving Rumsfeld a medal," said protester Elizabeth Doering, whose grandfather and father were longtime club members. "It's such a crass gesture."

Who's handing out the lapel candy next, the Sons of the American Revolution? The best part: the League politely declines to say what the award is for. The imagination roils while I laugh like a drain at conservative Republicans. Suck-ers!