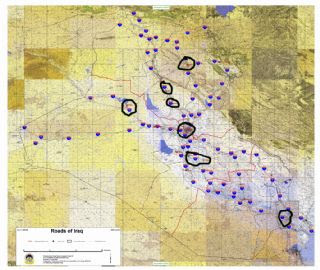 Mythbusting, Pt. VI: The Urge To Surge
Whom the Gods would destroy
They first make mad.
Euripides, ca. 440 BC

The White House is desperate enough to employ ignorant, pie-in-the-sky think tank pukes to go around the Pentagon in order to seek politically palatable options, and it is once again violating the very fundamentals of sound military operational planning by advocating a "surge" in occupation troop levels.

The Joint Chiefs of Staff apparently resent having their advice ignored, and are publicly NOT on board with the think-tankers' hare-brained scheme to pacify Baghdad. The Chiefs of Staff have stated the obvious points, i.e., the insurgents will simply go make trouble elsewhere, because that's what insurgents do, and that sending in another 30,000 combat personnel will definitively break the army. They didn't mention that the plan to disarm and disband the Mahdi Army (the 50,000-strong militia in Sadr City) might hit a few snags, such as heavy casualties in house-to-house fighting, a general uprising in Baghdad, a truce of co-belligerent convenience between the Sunni insurgency and the Shia Iraqi defense forces currently waging a civil war, and probably a direct assault on the Green Zone.

The Troop Surge Plan will make even more Coalition troops more vulnerable. It's downright crazy. Above left is the map of the US military bases along the Iraqi road networks as of 3-4 months ago. The 7 major supply depots are circled in black. Look at the base in the southeast just over the Kuwaiti border and the next depot just south of Baghdad. That's a long way between major bases, over 200 kilometers, and there are only two major routes connecting Baghdad to Kuwait. Most supplies are trucked in not by the military, but by private military contractors. Any significant action against Al Sadr's forces in Baghdad will result in those supply lines being cut, re-opened, and re-cut, and the battle will quickly devolve from "disarming terrorists to secure Baghdad" to a desperate fight to preserve the US army's carotid artories carrying its life's blood into the heart of Iraq. Oh, and disarming the Shia militias puts the permanent kibosh on the Death Squad Option (translation: attaching US advisors to Shia units which then seize and murder suspected Sunni insurgents) currently being followed as the path to Iraqi sovereignty.

Halliburton and KBR, the army's main suppliers, do not have significant facilities in Turkey; their supplies come by sea into Kuwait, and are carried north from there. Neither private companies nor the Army are ready to conduct supply from the opposite direction. Recently an entire convoy was lost when "men wearing Iraqi Defence Forces uniforms" put up a roadblock on the road northwest of Kuwait and seized drivers and trucks. It was that simple. If the Shia majority determines to get rid of US forces in Iraq, they have the ability to do so, and so far they have stopped short of active resistance, preferring to use our troops as tools to settle old grievances with the Sunnis. Far from securing anything, the urge to surge will precipitate a multi-level disaster and put an end to Shia cooperation. To put it mildly, control over the Southeast Shia rump of Iraq would be lost in short order. We'll see how incoming Secretary of Defense Bob Gates, an old Washington hand, referees this debate, or if he can bring some measure of sanity to the rats running this shit-house. Right now no one seems capable of dealing with a raging, delusional Rat King; at stake is the choice between a stinging defeat in Iraq and a decisive defeat in the world. Good luck, Bob.